The Origami Brain and a new marker for Schizophrenia 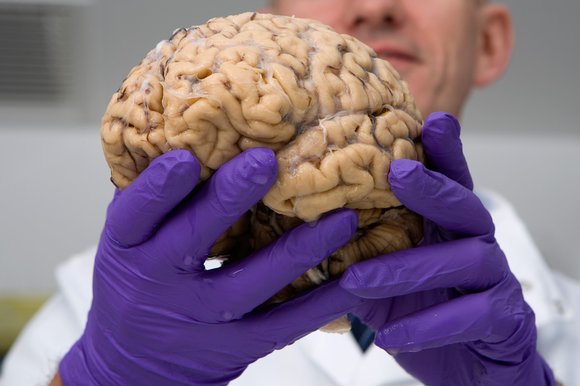 Anyone who has seen pictures or models of the human brain (like the one above) is aware that the outside layer, or cortex, of the brain is folded in an intricate pattern of “hills”, called gyri, and “valleys”, called sulci which give the brain it’s distinctive look. It turns out that the patterns of cortical folding are largely consistent across healthy humans, broadly speaking. However, disturbances in cortical folding patterns suggest deeper disturbances in brain structure and function.

A new study suggests that schizophrenia is associated with reductions in the complexity of the cortical folding pattern that may reflect deficits in the structural connections between brain regions. Science has known that the folding of the brain is important in it’s development, but this is the first time that it has been linked to mental illness.

“The cortical folding pattern itself may not be so important, but the disturbances in connections between brain regions implicated by the changes in cortical folding could provide critical clues to deficits in the integrity of brain circuits that contribute to symptoms and functional impairment in schizophrenia,” Dr. John Krystal, co-author said.

Senior author Dr. Matcheri Keshavan said, “The main finding was that psychotic disorders are characterized by reduced folding of the cortex in key brain regions such as the cingulate cortex (a brain region involved in thinking and emotions). Reductions in cortical folding may reflect alterations in brain development early in life in these disorders. We also observed these alterations in first degree relatives at high risk for psychotic illnesses.”

With imaging data from 931 participants, this study is one of the largest of its kind and helps to resolve a diverse literature that has produced inconsistent findings, particular in studies of schizophrenia patients. With the consistency of this data in both the patient and relative groups, compared to the healthy group, this study suggests that hypogyria (or a lack of folding of the brain) may mark familial risk for psychotic illnesses.

The importance of this finding cannot be overstated. Psychotic Disorders can not only tear families apart, it can cause even more unneeded death. As I mentioned in an earlier post, I’ve had first hand experience how things like this can completely destroy families. Being able to diagnose and treat prior to a psychotic break is important not just for the family, but for the person suffering from the condition.

My friends brother is in prison, for something he didn’t even realize he did, things like this have to stop hopefully sooner than later.

This entry was posted on September 11, 2014 by The Lunatic. It was filed under Neuroscience Research, Psychology and was tagged with health, medicine, neurology, Schizophrenia, science.