It’s alive!! Study adds to evidence that viruses are alive 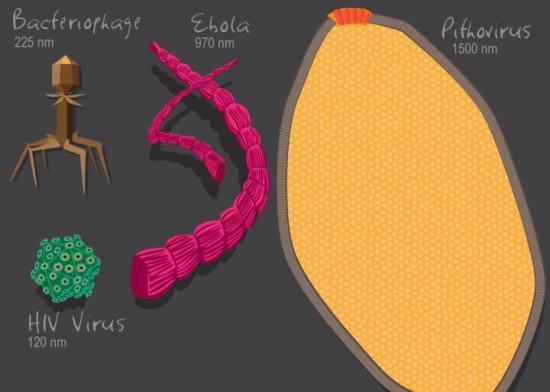 The diverse physical attributes, genome sizes and lifestyles of viruses make them difficult to classify. A new study uses protein folds as evidence that viruses are living entities that belong on their own branch of the tree of life.
Image credit goes to: Julie McMahon

Classifying something as living isn’t as easy as it sounds, after all we are all atoms, so when do atoms go from nonliving to living? Despite the complexities of viruses, we have historically deemed them nonliving. However, a new analysis supports the hypothesis that viruses are living entities that share a long evolutionary history with cells. The study offers the first reliable method for tracing viral evolution back to a time when neither viruses nor cells existed in the forms recognized today.

Until now, viruses have been difficult to classify, said University of Illinois crop sciences and Carl R. Woese Institute for Genomic Biology professor Gustavo Caetano-Anollés, who led the new analysis with graduate student Arshan Nasir. In its latest report, the International Committee on the Taxonomy of Viruses recognized seven orders of viruses, based on their shapes and sizes, genetic structure and means of reproducing.

“Under this classification, viral families belonging to the same order have likely diverged from a common ancestral virus,” the authors wrote.

“However, only 26 (of 104) viral families have been assigned to an order, and the evolutionary relationships of most of them remain unclear.”

Part of the confusion stems from the abundance and diversity of viruses. Less than 4,900 viruses have been identified and sequenced so far, even though scientists estimate there are more than a million viral species. Many viruses are tiny – significantly smaller than bacteria or other microbes — and contain only a handful of genes. Others, like the recently discovered mimiviruses, are huge, with genomes bigger than those of some bacteria.

The new study focused on the vast repertoire of protein structures, called “folds,” that are encoded in the genomes of all cells and viruses. Folds are the structural building blocks of proteins, giving them their complex, three-dimensional shapes. By comparing fold structures across different branches of the tree of life, researchers can reconstruct the evolutionary histories of the folds and of the organisms whose genomes code for them.

Today, many viruses — including those that cause disease — take over the protein-building machinery of host cells to make copies of themselves that can then spread to other cells. Viruses often insert their own genetic material into the DNA of their hosts. In fact, the remnants of ancient viral infiltrations are now permanent features of the genomes of most cellular organisms, including humans. This knack for moving genetic material around may be evidence of viruses’ primary role as “spreaders of diversity.”

The researchers analyzed all of the known folds in 5,080 organisms representing every branch of the tree of life, including 3,460 viruses. Using advanced bioinformatics methods, they identified 442 protein folds that are shared between cells and viruses, and 66 that are unique to viruses.

“This tells you that you can build a tree of life, because you’ve found a multitude of features in viruses that have all the properties that cells have,” Caetano-Anollés said.

In fact, the analysis revealed genetic sequences in viruses that are unlike anything seen in cells. This contradicts one hypothesis that viruses captured all of their genetic material from cells. This and other findings also support the idea that viruses are “creators of novelty.”

“[The data suggest] that viruses originated from multiple ancient cells … and co-existed with the ancestors of modern cells,” the researchers wrote.

The data also suggest that at some point in their evolutionary history, not long after modern cellular life emerged, most viruses gained the ability to encapsulate themselves in protein coats that protected their genetic payloads, enabling them to spend part of their lifecycle outside of host cells and spread. The protein folds that are unique to viruses include those that form these viral “capsids.”

“These capsids became more and more sophisticated with time, allowing viruses to become infectious to cells that had previously resisted them,” Nasir said. “This is the hallmark of parasitism.”

“Many organisms require other organisms to live, including bacteria that live inside cells, and fungi that engage in obligate parasitic relationships – they rely on their hosts to complete their lifecycle,” he said. “And this is what viruses do.”

The discovery of the giant mimiviruses in the early 2000s challenged traditional ideas about the nature of viruses.

“These giant viruses were not the tiny Ebola virus, which has only seven genes. These are massive in size and massive in genomic repertoire,” he said.

“Some are as big physically and with genomes that are as big or bigger than bacteria that are parasitic.”

Some giant viruses also have genes for proteins that are essential to translation, the process by which cells read gene sequences to build proteins. The lack of translational machinery in viruses was once cited as a justification for classifying them as non-living.

“This is no more,” Caetano-Anollés said. “Viruses now merit a place in the tree of life. Obviously, there is much more to viruses than we once thought.”

This entry was posted on September 25, 2015 by FullMetal. It was filed under Biology, Genetics and was tagged with biodiversity, evolution, Genetics, health, infectious diseases, medicine, microbiology, peer reviewed, science, virology.