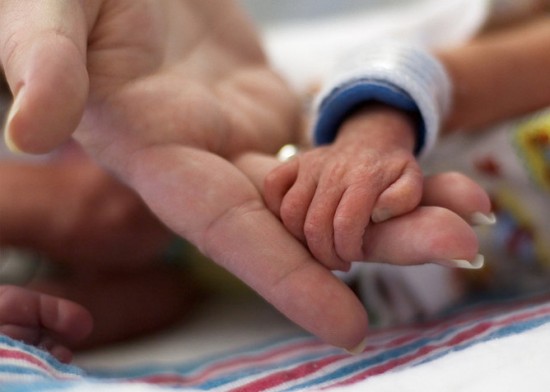 Babies born prematurely face an increased risk of neurological and psychiatric problems that may be due to weakened connections in brain networks linked to attention, communication and the processing of emotions, new research shows. Studying brain scans from premature and full-term babies, researchers zeroed in on differences in the brain that may underlie such problems.

“We usually can’t begin interventions until after symptoms develop, but what we’re trying to do is develop objective measures of brain development in preemies that can indicate whether a child is likely to have later problems so that we can then intervene with extra support and therapy early on to try to improve outcomes.”

The findings are being presented Oct. 19 at Neuroscience 2015, the annual scientific meeting of the Society for Neuroscience. A news conference to discuss the study will be held at 10 a.m. ET at the meeting’s headquarters at McCormick Place in Chicago.

One of every nine infants in the United States is born early and, thus, with increased risk of cognitive difficulties, problems with motor skills, and attention deficit-hyperactivity disorder (ADHD), autism spectrum disorders and anxiety.

To get a better picture of how premature birth affects the brain, Rogers, along with senior author Christopher D. Smyser, MD, assistant professor of pediatric neurology, and colleagues in the Washington University Neonatal Development Research Lab used functional magnetic resonance imaging and diffusion tensor brain imaging to compare 58 babies born at full term with 76 infants born at least 10 weeks early. Each full-term baby was scanned on his or her second or third day of life. Each premature baby, meanwhile, received a brain scan within a few days of his or her due date.

The researchers found that some key brain networks — those involved in attention, communication and emotion — were weaker in premature infants, offering an explanation for why children born prematurely may have an elevated risk of psychiatric disorders.

“We found significant differences in the white matter tracts and abnormalities in brain circuits in the infants born early, compared with those of infants born at full term,” said Rogers, who treats patients at St. Louis Children’s Hospital.

White matter tracts in the brain are made of axons that connect brain regions to form networks. The researchers also found differences in preemies’ resting-state brain networks, particularly in a pair of networks previously implicated in learning and developmental problems. 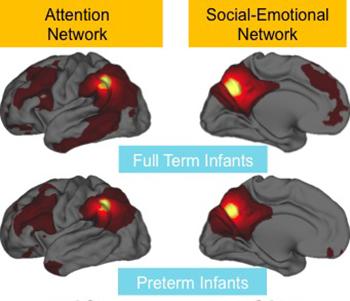 A comparison of brain scans from babies born at full term and at least 10 weeks prematurely shows differences in the activity of brain networks. The red and yellow areas represent coordinated activity. In preemies, the red areas are smaller due to less coordinated activity between these regions.
Image credit goes to: Washington University School of Medicine

Among these resting-state networks is the default mode network, which tends to be most active when people are least active. The greatest differences between full-term and preterm babies were seen in this network and in the frontoparietal network. Both encompass brain circuits associated with emotion and previously have been linked to ADHD and autism spectrum disorders.

Rogers said these brain circuit abnormalities likely contribute to problems that materialize as the children get older.

To see whether that’s true, Rogers and her colleagues are continuing to follow the babies, having completed follow-up evaluations when the children reached age 2, and again on some at age 5. The researchers plan another series of brain scans in a few years as the original study participants reach the ages of 9 or 10.

“We’re analyzing the data we’ve already gathered, but we want to bring the children back when they are 9 or 10 and continue to follow their development,” she said.

“We want to look at the evolution of brain development in full-term versus preterm babies, and we want to know how that may affect who is impaired and who is not.”

That information may help doctors and scientists target abnormalities in the brains of preterm babies and, potentially, change the course of their development.

This entry was posted on October 18, 2015 by The Lunatic. It was filed under Biology, Health and Medicine, Neuroscience Research and was tagged with behavioral science, cell biology, children, medicine, Mental Health Stuff, neurobiology, neurology, parenting, peer reviewed, science.