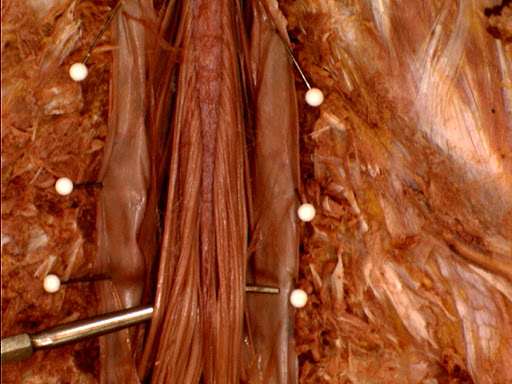 Here we are on day twenty-eight of knowing your spinal cord. A friendly reminder, the entire series has its own neuroanatomy category where you can catch up on any posts you missed or if you just want a reminder on something we already covered. We’ve already covered quite a bit of spinal disorders, but there is one more that I want to talk about and like our series where we started at the top of the cord and worked our way down, we are now going to cover damage to the bottom of the cord, specifically the cauda equina.

Like the name suggests (it’s latin), the cauda equina looks a lot like a horses tail. However, as we covered it serves a very important function. While it doesn’t have the neural machinery the spinal cord has, it partially innervates the lower half of the body. That being said, let’s talk about what exactly cauda equina syndrome is and how we treat it.

If you recall we covered something called a tethered spinal cord, cauda equina syndrome is somewhat similar, but as the name implies, it affects the cauda equina and not the spinal cord itself. Technically the disorder means that the cauda equina becomes damaged. This doesn’t have to happen by tethering. However, one of the more common causes is spinal disk herniation, which then causes pressure to be applied to the cauda equina, not unlike what happens when you have a tethered spinal cord. Below is an image (red arrow) that shows what a herniated disk looks like, which also helps explain why it can cause this type of damage. 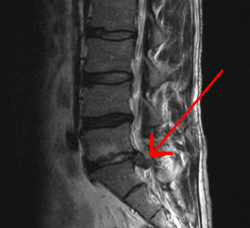 Disk herniation (red arrow) is typically caused when the spinal column compresses and the membrane around the disk ruptures.

This isn’t the only way this type of injury can happen either. Things like cancer, a hematoma, spinal stenosis, or even an abscess can cause enough compression to do damage. This type of injury can happen at any age, although typically it occurs in older populations due to normal wear on the body. There is no known risk factors for cauda equina syndrome, but it isn’t a super common disorder with about  1 in 70,000 people affected every year.

Cauda equina syndrome has several symptoms associated with it that makes it unique in terms of presentation. This is in part due to the area of the body the cauda equina innervates in particular. This typically presents with something called saddle anesthesia (yes another horse reference). Saddle anesthesia is partial loss of feeling or feeling “pins-and-needles”  around the groin and inner thighs which would contact a saddle when riding a horse. The image below highlights the area affected by saddle anesthesia.

Area of the body affected by saddle anesthesia (shown in yellow).

As you can imagine, if the sensation is affected function may be affected as well. This is often the case, people who are diagnosed with this syndrome will often experience bladder and bowel dysfunction. Additionally, a person may lose sensation or function of the lower extremities, so you may present with muscle weakness, abnormal gait, things of this nature.

Now let’s talk about the prognosis. Thankfully if caught early surgical intervention is typically indicated and can lead to a full recovery (yay). Unfortunately about 20% of people still have a bad outcome despite surgery, so it isn’t a completely fixable thing. The good news here is that unlike the spinal cord, the cauda equina can heal, it nerve growth is possible so the most important aspect for a good outcome is the severity and duration of compression upon the damaged nerve(s). Generally, the longer the time before intervention to remove the compression causing nerve damage, the greater the damage caused to the nerve(s). Below we show another MRI, this time highlighting the damage caused by an abscess, which we’ve highlighted with a red arrow. 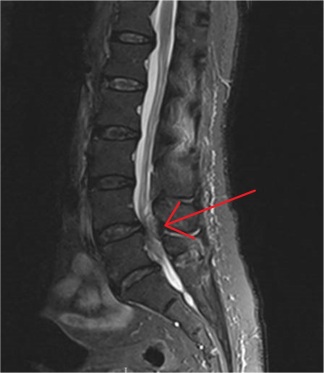 The issue here is that nerve damage can be so severe that regrowth is impossible, and the damage will be permanent. If caught early and the nerve is still capable of regrowth, recovery time is widely variable. Surgical intervention with decompression of the cauda equina can assist recovery. Delayed or severe nerve damage can mean up to several years’ recovery time because nerve growth is exceptionally slow.

So that covers what you should know about cauda equina syndrome. Tomorrow we are going to shift a bit and talk about some of the other more neuroanatomy specific things we haven’t covered yet.

This entry was posted on February 20, 2020 by The Lunatic. It was filed under 365 Days of Academia - Year one, Neuroanatomy and was tagged with biology, blog, daily routine, education, life, neurology, neuroscience, PhD, science, spinal cord.