You may notice my wood ladder, I built it to get to the ceiling.

Today we’re going to go over a few other patch jobs I’ve had to make around the house since I’ve been here. These were intentional as you’ll see. I needed some outlets put in and in order to do that holes were made, luckily I have some photos of that portion of the work just because it was so fun to watch. While, the plugs were installed professionally, the patches were done by me.

The logic went something like this, I wanted motorized blinds. There were several reasons behind this (accessibility for one, I’m disabled after all and sometimes it’s hard to work with things… anywho). My living room has high ceilings, so I wanted a plug close to the blinds so I didn’t have to run the wire down to the outlet below, I just felt like it would look cleaner. 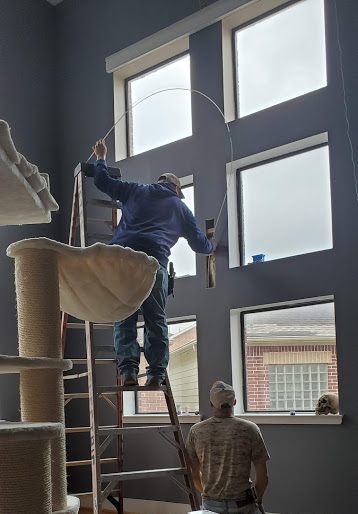 Here is an action shot of the wire being run from the plug below to basically the ceiling. You’ll also notice the rather large hole made to run the electrical, that was one of three. Here’s a shot of the plug being installed to give you a sense of just how high up this plug is.

Also, you probably shouldn’t stand on a ladder like that, but that’s just me. He seemed like he was comfortable doing it so who am I to question it? But really, don’t do it. That was one of two plugs installed, the other set of windows was slightly more complicated so we had two holes made for that. Here’s a shot of the aftermath… my poor, poor walls!

Three rather large holes left for me to patch, if you look closely at the one on the bottom left they cut into the studs and placed a metal brace over it, this isn’t structural persay, it’s to keep me (or whoever owns the house eventually) from trying to screw something in right at that spot and hitting the electrical line. So let’s look at the mess I had to deal with afterwards. If you remember from my last post, same process, screw in a 2×4 for backing and attach the drywall, a few layers of plaster and then texture. However, I had windows to worry about so there was a lot of prep work for this one. Here’s a couple of shots of that part in this process.

Yeah a lot of tape and plastic. I also took the time to even out some of the spots around the window that was annoying me, this was a good call since they had been bothering me since I first noticed the problem. So with that, let’s take a look at the final product!

So there you have it, all cleaned up, textured, and painted. This again was a few hours of work, but took days because I needed to let the plaster dry. Now I just need to hang the second set of blinds, which will be harder than that sounds since it’s just me and they are rather long, this was the shorter set and I barely got it. So that will be fun!

This entry was posted on May 17, 2020 by FullMetal. It was filed under 365 Days of Academia, DI...why?! and was tagged with DIY, Engineering, home improvement, lighting, PhD, renovation.