Luckily this wasn’t my fault, but it does make for a good story now.

It was bound to happen eventually. We all knew it would, but we didn’t expect it to fail in such a spectacular manner. That is to say, all at once. One of the people I’m mentoring checked out some lab equipment since we had come up with a way to do experiments from the comfort (see: safety) of her home. That was the plan anyway…

Most of the summer was spent ironing out the details. Getting the methodology nailed down so that we could get in, the the work done, and get out. It was the perfect pandemic plan. Experiment from home so that no one would be put at risk. We spent literally months meeting weekly to go over the details, workout the bugs, and start writing the conference paper that would come from this experiment.

Then the materials were gathered, the paperwork was filled out and we were ready. The equipment was in hand and we could do the experiment and my mentee would get the chance to experience some of the scientific process first hand, from idea for experiment to finished conference publication! It was step one in my multi-step, multi-year plan for my mentee.

We had talked about that too of course, she had to want it. I wasn’t going to make her do something that I thought was best for her if she didn’t want to do it. That would make me a shitty mentor and I try not to be that person. I also have a philosophy that you shouldn’t hold the person you mentor back. If they have a goal or want something, what gives me the right to keep them from going after it? So I offered her my vision, she was excited/motivated, and we quickly got on the same page.

Of course the best laid plans and all that. The equipment broke. Again, it was older equipment and this was bound to happen. It wasn’t her fault, it’s not like she broke it and even if she had, as long as it wasn’t intentional, we wouldn’t have problems. Things break and sometimes people break those things. In this case, time broke it. The battery won’t hold a charge anymore. This wouldn’t be a problem if it weren’t for the fact that we can barely use the device when it’s plugged in.

After having a mini-heart attack (that I may or may not have had a hand in by making an off hand joke about how she was in trouble now), we reached out to my PI and just like that we are in the process of getting it replaced. She’s actually helping with the ordering. The first time you ask your lab for something, it can feel awkward. I remember helping set up the first lab I joined and how uncomfortable the first few orders were.

It was an unexpected learning experience, but a good one. Plus it gave me a chance to remind her that things break and we expect it. There’s a difference between negligence and accident or bad luck. While I feel slightly guilty about my joke, she’s reassured me that she got a good laugh out of it when she read the next line in the email where I assured her it was a joke. Also she remembered the laser cutter story.

It wasn’t something I broke, I have my own embarrassing stories about wasting money or breaking things, but nothing quite like the laser cutter incident. That was probably the worst accident I had saw that didn’t involve anyone getting physically injured by machining equipment. Which, to be fair I don’t think happened in all my years of being at that school, we had an amazing shop manager who had a ton of experience so it wouldn’t surprise me if we hadn’t had an injury in years.

Anywho the laser cutter story is simple, someone tried to cut something they shouldn’t have and walked away from the laser cutter. When they returned it was a big ball of flames that caught part of the school on fire as well. It was an accident, the student probably got talked to about it, but they certainly didn’t get in serious trouble for it. They stayed in the program and were probably forever afraid to use a laser cutter again.

Accidents happen and we learn from them. Sometimes others get to learn from those accidents as well. So I like to tell people the laser cutter story, because it’s hard to have an accident that bad. 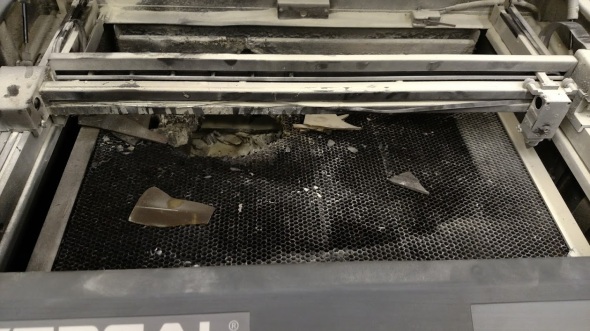 The inside of the laser cutter (the outside shown at the top of the post.

This entry was posted on July 27, 2020 by FullMetal. It was filed under 365 Days of Academia and was tagged with education, experiment, life, mentoring, PhD, PTSD, school, teaching, undergrad.