5 Reasons Why Science is Losing the War

Science is losing an unseen war and like any war it isn’t without its casualties. The true body count won’t be evident, not at first. This isn’t a war over land, or freedoms, it is a war on ignorance, a fight for the future. Science has brought us a level of comfort and connectivity we have never really seen. Unfortunately that connectivity is being used against us, allowing people with dubious motives to shout from the rooftops bold faced lies and a call for people to follow.

Here are 5 reasons why science is losing that war:

We are a passionate bunch, it’s true and sometimes despite how smart a person is, the words just don’t come out right. True not all scientists are inept in dealing with people, a few notable examples — Bill Nye and Neil deGrasse Tyson.

Never the less, there is a discontinuity between the scientific community and the general public.  This discontinuity is often the best weapon pseudoscience has to use against science and one they use often. I believe the problem lies in the idea that most scientists are researchers and spend all day around people who know the subject they are working on, when left to explain something as advanced as the latest advancements in neuroscience to the average person, it typically doesn’t happen because they lack understanding of what the average person knows and doesn’t know.

That is when someone preaching pseudoscience steps in and uses familiar buzz words like “organic” or “chemical” which [falsely] simplifies the problem and makes it easy to grasp, this makes it easy to offer a counter solution to the one science gives.

No matter how right science is, if the people cannot understand it, they will harbor doubt about it’s authenticity.

2. We need another Einstein

Science is boring if you aren’t interested in the subject and you don’t know all the field entails. When most people think science they probably think dark roomed loaner with a labcoat on working on things that don’t seem to make sense to anyone.

Then came Einstein, it was perfect timing for him to be around. Science had brought just about everything it had to the table by the time world war 2 was finishing up and people were fascinated with the story of the atomic bomb. Einstein was a rockstar scientist, one who’s presents can still be felt today, how many times have you heard someone call a person an “Einstein” or even the baby toys– little Einsteins.

Again the notable scientists that I listed prior to this fit the bill and are gaining mainstream popularity, but it isn’t the Einstein rockstar type status that draws people to studying science in droves. What we need is a real life Tony Stark or maybe just a better way to draw people to science, like a not so Disney style tomorrowland exhibit to get people thinking about the future again.

3. It’s hard to argue against what you don’t know

The young earth movement and other pseudoscience efforts are being backed by others calling themselves scientists or worse, in the case of vaccines celebrities who have no business telling anyone about anything, trying to tout the dangers of something they don’t understand.

That makes it harder for a real scientist or the scientific community as a whole to come forward and argue against it, especially when these people are indoctrinating their children at an early age that the way they think is correct and everyone else is wrong.

Short of slapping them, there is no way to argue with someone who doesn’t even understand what they believe in. So when Bill Nye debated the young earth model with the “scientist”  Ken Ham, there was no way for Bill Nye to ever convince him that he was wrong, despite providing more than enough proof to counter his believes. It was summed up in one question: 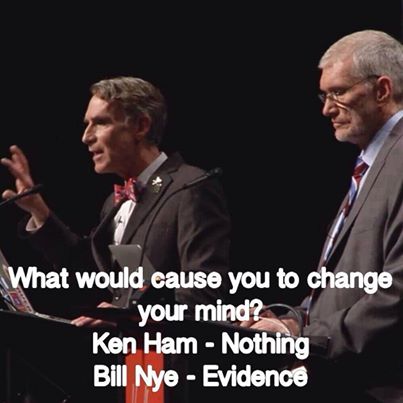 Being dumb is becoming the mainstream thing to do. Look at the popular “reality” TV shows if you need more proof, The Jersey  Shore, Keeping up with the Kardashians, The Real World, 16 and pregnant, all glorify the idea that stupid is the way to be, not only that, but you can be stupid and successful.

So when people strive for an education, especially here in the US where we are far enough removed from the rest of the world [we only share two borders and are separated by oceans from the rest of everything] they are made fun of, they are put down and they are bullied. How many people need to die from bullying before we lose the person who could find the cure for cancer, eliminate disease, or even expand the space program.

Maybe we already lost them, many times over.

5. There is a science smear campaign

What is the best way to prove your point? It’s not to show that you are correct, it is to seed doubt in the  other person so people think your opponent is wrong. That is exactly what is happening today in science, thanks to things like the anti vaccination movement and a general distrust in anything government backed, science is being looked at like the “bad guy”. That scientists are hiding some “larger truth” or that they are being paid huge amounts of money to say whatever they are saying.

None of which is true, if they couldn’t keep Snowden from releasing government secrets it would be impossible for some 50+ year conspiracy to continue without a single person providing any sort of credible evidence to show that it is occurring. This is why we peer review work, to stop bad science from getting out there, it isn’t perfect, but it works well and even when bad science slips through the cracks it is quickly fixed, see my post on stem cell research for proof of that.

We are in dire need of something to change, without young scientists [especially women scientists] entering any field of research [biology, chemistry, physics, engineering, computer science, there are far too many to actually list.] we as a collective human race are done for, so please support science and the scientific method, pass the knowledge on to your kids and support their math and science education.

Because if you hate math or science, so will your children and you shouldn’t do that to them.

This entry was posted on May 4, 2014 by The Lunatic. It was filed under Politics, Thoughts from the Lab and was tagged with Education, future, physics, political issues, pseudoscience, science.