Cheaper, Cleaner Biofuel: A Temporary Fix to a Big Problem 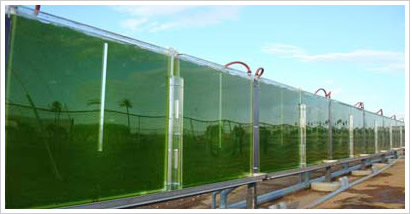 Algae, the other, other biofuel

Biofuels seem to be all the rage these days, not a bad thing since that whole global warming thing [that people are scared to admit is real] is going on. It is then, very unfortunate that every biofuel or even “green alternative” has an achilles heel the size of Texas keeping it from becoming our fossil fuel replacement.

[ Loony Fact: I shudder every time I have to use the word “Green” referring to anything other than the color. Oh and Jesus roundhouse kicks a panda in the face, so save the pandas and stop using the word green for anything but the color]

Biofuels made from food  had a huge impact on the cost of food [not just corn], who would’ve thought that if the demand increased the price would increase too — Economics 101 people.

Hydrogen power, possibly the dumbest, smart thing ever invented, is [in my opinion] the most obvious attempt to sabotage the effort to getting away from fossil fuels. The cost of creating, then mass producing a safe hydrogen cell combined with the cost of retrofitting every gas station in a Town/ City/ State/ America/ World would not even be worth the conversion.

Electric, my personal favorite and [again in my opinion] frontrunner for getting away from fossil fuels has two major problems with it. The battery technology might as well be from the stone age, without a renewable battery we can never have a waste free electric car. The other issue is where the power comes from, coal and fossil fuel power plants just don’t cut it, nuclear has that whole storage problem and people fear nuclear power for some crazy reason [thanks chernobyl for polarizing the people to the cleanest energy source at our disposal right now].

Creating biofuels from non-food sources is the short term fix to a long term problem, which is exactly what science is working out right now. A new process from the U.S. Department of Energy’s Ames Laboratory has created a faster, cleaner biofuel refining technology that not only combines processes, it uses widely available materials to reduce costs.

Ames Laboratory scientists have developed a nanoparticle that is able to perform two processing functions at once for the production of green diesel, an alternative fuel created from the hydrogenation of oils from renewable feedstocks like algae.

[And just now Jesus roundhoused a panda; I hope you are happy people]

Conventionally, when you are producing biodiesel from a feedstock that is rich in free fatty acids like microalgae oil, you must first separate the fatty acids that can ruin the effectiveness of the catalyst, and then you can perform the catalytic reactions that produce the fuel,” said Ames Lab scientist Igor Slowing. “By designing multifunctional nanoparticles and focusing on green diesel rather than biodiesel, we can combine multiple processes into one that is faster and cleaner.” Contrary to biodiesel, green diesel is produced by hydrogenation of fats and oils, and its chemical composition is very similar to that of petroleum-based diesel. Green diesel has many advantages over biodiesel, like being more stable and having a higher energy density.

[Yes you read that right his name is Igor, how cool is that?!]

The really cool science behind this, you need to use a catalyst for the reaction and the team first used Nickel because it is approximately 2000 times less expensive and is a possible alternative to noble metals traditionally used in fatty acid hydrogenation, like platinum or palladium.

The catalyst worked too well and the process resulted in too strong of a reaction, with hydrocarbon chains that had broken down. The process, called “cracking,” created a product that held less potential as a fuel. Which the team overcame this with a component responsible for the sequestration of the fatty acids, which means they could use the catalyst and produce the biofuel at a quicker rate.

It gets even better though, the team then replaced the nickel with iron, iron is 100 times cheaper than nickel. Using iron improved the end product even further, giving a faster conversion and also reducing the loss of CO2  in the process. Sure it may just be diesel, but it’s a step in the right direction.

Love nanoparticles as much as I do? You probably want the full study —here!

This entry was posted on May 13, 2014 by FullMetal. It was filed under Biology, Environment and was tagged with biofuel, future, global warming, lifestyle, political issues, science.