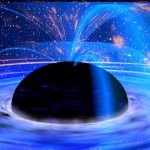 Black holes suck. Nothing can escape a black hole, not even light, which is why they are “black”. They are also an interesting bit of physics. Normally “classical” physics applies to things that are large enough to see [and even things that you can’t in some cases]. Conversely quantum mechanics deals with the “unseen”, atoms and their interactions. That is normally the end of the story, never shall the two meet.

In fact, because there is no clearly defined line between the quantum and the classical, there has been trouble blending the two theories. Which is unfortunate in that there are a few specific examples where the quantum world and the classical world collide, one of them just happens to be black holes.