Parents’ math skills ‘rub off’ on their children 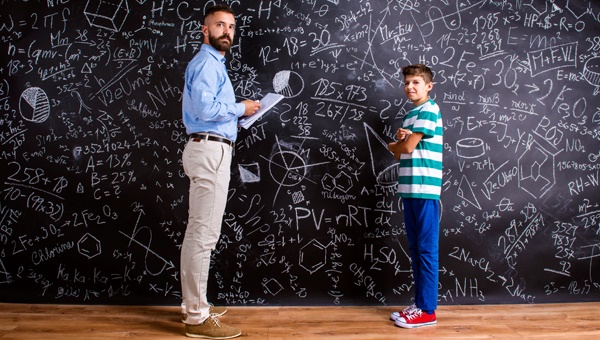 Parents who excel at math produce children who excel at math. This is according to a recently released study, which shows a distinct transfer of math skills from parent to child. The study specifically explored intergenerational transmission–the concept of parental influence on an offspring’s behavior or psychology–in mathematical capabilities.

“Our findings suggest an intuitive sense for numbers has been passed down–knowingly or unknowingly–from parent to child. Meaning, essentially, the math skills of parents tend to ‘rub off’ on their children,” said lead researcher Melissa E. Libertus.

“This research could have significant ramifications for how parents are advised to talk about math and numbers with their children and how teachers go about teaching children in classrooms.”

Within the study, researchers found that the performance levels for early school-aged children on standardized mathematics tests could be reliably predicted by their parent’s performance on similar examinations. Specifically, they observed major correlations in parent-child performance in such key areas as mathematical computations, number-fact recall, and word problem analysis.

Researchers determined that such close result parallels could not have been produced through similar institutional learning backgrounds because their previous research showed that this intuitive sense of numbers is present in infancy.

The findings represent the first evidence of intergenerational transmission of unlearned, nonverbal numerical competence from parents to children. While separate studies have pointed to the existence of intergenerational transmission of cognitive abilities, only a select few have examined parental influences in specific academic domains, such as mathematics.

The study is an important step toward understanding the multifaceted parental influences on children’s mathematical abilities. Future studies will examine why this transference of mathematical capability occurs.

“We believe the relationship between a parent and a child’s math capabilities could be some combination of hereditary and environmental transmission,” said Libertus.

“We look forward to future research endeavors that will explicitly examine the degree to which parents pass down key genetic traits and create an in-home learning environment that is conducive to producing high-achieving math students.”

For the present study, the math abilities of parents and children were assessed using the appropriate subtests from the Woodcock-Johnson III Tests of Achievement, a nationally recognized standardized examination of baseline math ability. Children completed three subtests designed to gauge their capabilities in mathematical computations, basic number-fact recall, and word problems with visual aids.

Parents completed a math fluency subtest as a measure of mathematical ability, and they were surveyed on the importance of children developing certain math skills.

The study sampled 54 children between the ages of 5 and 8 as well as 51 parents–46 mothers and five fathers–between the ages of 30 and 59. In terms of racial demographics of participating children, 45 were Caucasian, five biracial, three African American, and one Asian. Forty-six participating parents had at least a college degree, and all possessed at least a high school diploma.

This entry was posted on September 4, 2016 by The Lunatic. It was filed under Psychology and was tagged with behavioral science, children, Education, intelligence, Math, memory, parenting, peer reviewed, problem solving, science.