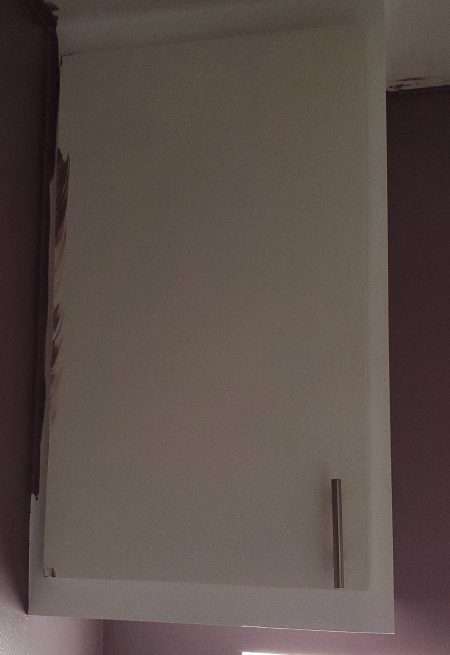 Today we’re going to do some demolition! Woo, time to break things!!! Actually I was hoping this was going to go smoothly, but I’ve already ripped out some of these cabinets and they are not easy to do, even after thinking I had the experience I needed to rip them out. Let me introduce you to the forever cabinet.

I nicknamed these the forever cabinet because they were built with so many screws and nails that I fully think that they will outlast the house. They are ugly and not very well built, but they are mostly made of sharp metal. For that reason, removing these were difficult and I hate doing it. I still have so many to pull down too! It’s ugh all around.

First step to removing these is to find the screws that hold the thing to the wall. This is actually not that hard in this case because they used some sort of glue or putty to cover the screws and it’s a slightly (very) different color than the color of the cabinet itself. This one had four that I could find, two on the underside, two on the very top. It was at this point that I realized the previous owners had left a disgusting surprise on the top shelf, some dried up bath mat and what looks to be a baby towel of some sort. EW. Those I didn’t want to touch so I left them on the shelf in the hopes I could pull the whole cabinet down in one piece… boy was I wrong.

In this photo you can see the screw holes at the top, the bottom piece I had ripped off trying to get the cabinet off. Those two bottom holes are holes in the drywall I made trying to pull it off the wall. Believe it or not all that is holding this in place right now is dark magic and the shear will of the cabinet to stay where it was put. 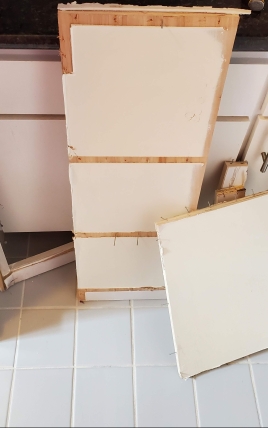 Here’s the parts I’ve ripped off already. Notice all the sharp pointy things (nails). Don’t cut yourself when removing cabinets, then again I hope if you are removing cabinetry they are better built than the one I am ripping out.

This is what was on the top shelf after I got the cabinet down, it is disgusting and I don’t want to touch any of it. The bath mat or whatever it is shattered so I have bits of it all over, I’ll spare you that cursed image. It’s probably been there for 5+ years and I’ve been in this house for almost two now so I can’t believe I didn’t find it already (I never use these cabinets, but I didn’t think to check if they were empty). Now that it is all down, I was left wondering why it was stuck on the wall. Nothing was holding it in place so I checked the only solid piece of wood that was stuck to the wall and… nothing. It was literally held on by some evil and dark force.

Yes, there is a screw on the bottom, that was already removed though, so I’m not sure what was holding it up, caulking around the outside, several coats of paint, the ominous sacrifice of a small child to the cabinet, something. Whatever it was, it is gone and purged from the home. THIS HOUSE IS CLEAN!! Okay, not quite yet I still had quite the mess to pick up.

Here’s a good shot of the aftermath. You may not know this, but everytime you add a coat of paint to a wall you’re adding a thin layer. In this case, there must have been several coats added because you can see the areas that were not covered with wood are quite elevated. If I cleaned up the holes and tried to paint it, this would be horribly obvious. So what we will do is remove the flappy parts of the drywall (the paper covering that ripped), patch the holes, use some plaster to raise the rest of the drywall to match our painted layer, sand, texture, paint. It’s a process for sure.

So here’s the first step to this process, we patch the holes and try to level the entire surface. Unfortunately this is about where I am right now. I’ve finished several coats of plaster and I’m about to sand, then I can texture and by the end of the day I plan on painting the rest of the bathroom, then I can get the light fixture in and be done with this. I would’ve waited to show the project in it’s finished state, but I’ve already shown the drywall repair process so I thought covering the cabinet removal would be a good thing to show.

Lastly, I use premixed drywall plaster and spackle. I particularly like the color change stuff that turns white when it is dry so I don’t start working prematurely with wet plaster. These are not quick drying, but I don’t mind and I prefer working with something that has a longer dry time since I can even it out and go back over it a few times. If I were using quick dry, I get about 5 minutes to apply and that’s it. While it’s nice to be able to work with it right away, I find I get better results doing it this way. Maybe if I were more skilled I could get through this quicker, but I am not quite there yet.

This entry was posted on May 19, 2020 by FullMetal. It was filed under 365 Days of Academia, DI...why?! and was tagged with cabinet, DIY, home improvement, renovation.