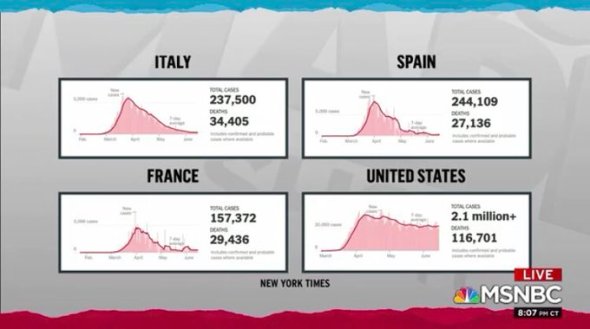 ♫ One of these things is not like the other… ♫

COVID-19 is making headlines again and news reports are claiming the second wave is here. Well, that’s not quite right, we never actually stopped the first. We literally cannot have a second wave of outbreaks if the first wave is still going strong, it’s just a continuation.

It’s going to get worse. Let’s just get this out of the way now. We have 119,000 deaths from the coronavirus and that is without a doubt undercounted due to the availability of testing and the political climate. I might as well have said billions, trillions of deaths, it doesn’t mean much when you’re reading it. We can put that into perspective since that is just a number and you have no emotional attachment to a number, especially one that large.

That’s over 700 people a day on average dying from COVID-19. Imagine for a moment if tomorrow you woke up and all your friends and your family, their friends and their family, all suddenly disappeared. Chances are that isn’t even 700 people yet and now do that daily from the beginning of this year to the day I am writing this (168 days). Now we are close to understanding how big that number is getting.

It’s going to get worse. People are running around without a mask on, going to bars and literally helping spread this. We are in a pandemic and people literally do not care. They would rather watch people die than put on a mask. We’re seeing record high cases now across the US. We never flattened the curve, we only slowed it and now we are making up for that. Hospitals are literally at capacity and that 700 people a day will start to climb when that happens.

That’s 700 people on average dying every day in spite of healthcare. That’s 700 people on average dying every single day with supplies stretched thin, but still available. What happens when we don’t have the supplies to take care of these people? Are you telling me that you would rather not wear a mask than save a person’s life? Okay, maybe you’re not sick, but you can’t say for sure. Maybe you’re healthy, but you can’t tell me that everyone you will come in contact with and everyone those people comes in contact with, are healthy. Why are so many people okay with the idea of killing others when they don’t have to pull a trigger to do it?

This is where I would end the post, but I have one more thing to add. Before someone comes in and screams “bUt ThE pRoTeStS!” Let me explain something, this spike was thanks to memorial day parties. Almost exactly two weeks after memorial day we saw this flood of people sick. It’s not a surprise since almost no one was wearing a mask. The black lives matter protests have almost all, if not all, the people masked. That’s all it takes to prevent the spread.

Wear the damn mask. Save a life. That’s all it takes.

This entry was posted on June 18, 2020 by FullMetal. It was filed under 365 Days of Academia and was tagged with black lives matter, COVID19, news, Pandemic, Politics.