On turning the other cheek 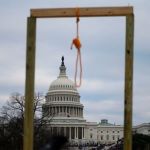 Unity, noun, the state of being united or joined as a whole. Less than a week after a failed attempt at a coup, the GOP is now calling for unity. Like a concerted and years long effort to overtake the government was some accident and we should just forgive and forget. I mean let the person who hasn’t tried to overthrow the government throw the first stone! No? Anybody?