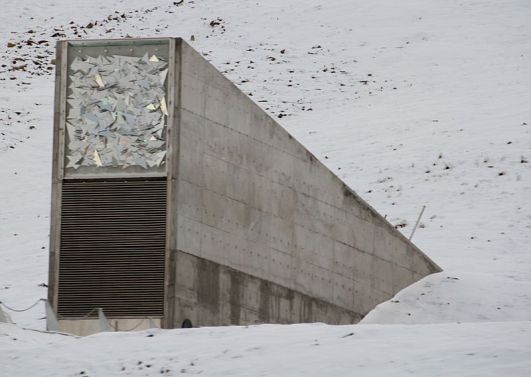 It sounds like something out of a sci fi movie, a vault that is designed to withstand the end of days. A ‘doomsday vault’, tucked deep in a mountain, designed to be self sufficient and keep it’s contents protected and safe for decades if not millennia.

From the outside it looks like some secret military bunker. A solid concrete tube that juts out of a mound of snow; a chain on either side of a ramp acting as a guide to the entrance, a man made object in the middle of nothingness.

No, this isn’t a movie, the bunker is very real and it’s purpose is to do exactly what it looks like, survive doomsday. Built in 2006 and finished almost 2 years later the Svalbard Global Seed Vault is home to over 20 million seed samples.

Located in Norway 430 feet above sea level and surrounded by permafrost the location is ideal, even after the ice caps melt the seeds will be safe. Kept at a cool -18 degrees Celsius, it is only 3 degrees cooler than the surrounding rock. This means it would take months without any power to raise the temperature and even this, would not necessarily harm the seeds. However, the ample supply of coal in the area offers an easy solution in that case to keep the refrigeration units running in the event of power failure.

This is what the seed vault looks like underneath the ice and rock.

Designed with security in mind the seed bank extends 120 metres into the sandstone mountain and the seeds are packaged in special four-ply packets which are then heat sealed to keep out moisture.

The facility was set up to need little or no maintenance and while it is managed by the Nordic Genetic Resource Center there is no permanent staff on-site, making the system almost completely free from human reliance.

The best part about it is that this is the last line, the final storage solution for a end of the world type scenario, but it isn’t the only line of defence. There are several other programs which store seeds, this being the end of the line in emergency storage.

So while things may be going extinct, if something were to happen to the global food chain, at the very least we were smart enough to think ahead and save something  in case of an extreme emergency. That information alone should make it slightly easier to get to sleep at night.

This entry was posted on March 31, 2014 by The Lunatic. It was filed under Biology and was tagged with doomsday, farming, future, health, political issues, science, seed vault, Svalbard.