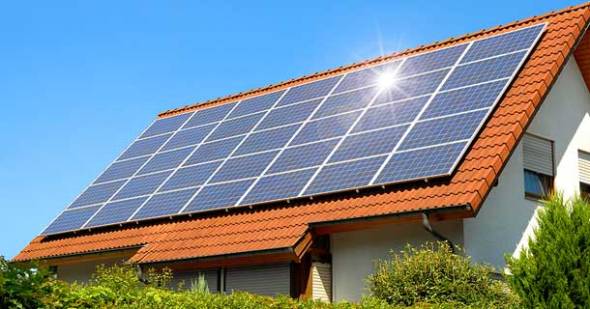 Solar cells, they’re kind of a big deal. Good for the environment, produce power from that big ball of burning gas we call our sun, they like long walks on the beach, cool drinks and just chilling with friends… oh sorry that’s from the wife swap [the wife and I love that show]. But in all seriousness, solar is the next oil. We had an industrial revolution and now we are going to have a more eco-friendly kind of revolution. Of course the high price of solar panels has made it all but inaccessible to the general public [I know I would love to have some on my roof!]. With natural gas and other sources of power being cheaper, solar needs to learn a few new tricks to keep up. Thankfully that is exactly what scientists at the University of Liverpool have accomplished.

Right now solar cells are inefficient at about 15% of the power actually converted to usable electricity. It is unfortunate then that solar cells need to be coated in a cadmium chloride to reach that paltry efficiency. I’ll let you in on a little secret, if it wasn’t for that coating we would only see about a 2% power conversion. Yeah damned if you do damned if you don’t stuff. That’s because that coating is roughly $0.30 a gram, doesn’t sound like much, but it adds up quick. Not to mention that there is a little problem with it being very toxic, incredibly hard to handle safely and hard to dispose of after solar cell decommission [I know… details, details].

Now, thanks to that team from the University of Liverpool that I mentioned before, that is all about to change. The team found that they could use magnesium chloride. Extracted from salt water and found in things like, tofu, bath salts and road deicers, it’s relatively harmless. A seemingly environmental happy alternative [for those who care about that sort of thing]. The cost is not even comparable, at roughly $0.001 per gram [yes roughly a 1/10 of 1 cent US] it is the clear winner here.

Okay so that is fine and dandy. I hate being the bearer of bad news… okay so here it goes. The cost savings from producing these new eco-friendly[er] solar cells will definitely drive the cost down, it has to just by design. It’s unfortunate then that the solar cell we know and love is made with something called tellurium one of the rarest known earth elements [again details, details]. The cost of tellurium is the main reason solar panels are so expensive [and unfortunately not on my roof… sad face].

So the real hurdle to cross is finding a way to eliminate tellurium in solar cell construction. That might not be so easy given the state of current technologies. It’s a pretty big hurdle for sure, but I have faith that it will happen eventually. Until then, at least we can improve around it and therefore lower the price even further. In any case, here’s hoping.

This entry was posted on June 27, 2014 by The Lunatic. It was filed under Environment, Technology and was tagged with alternative energy, nature, physics, political issues, science, solar, solar panels.