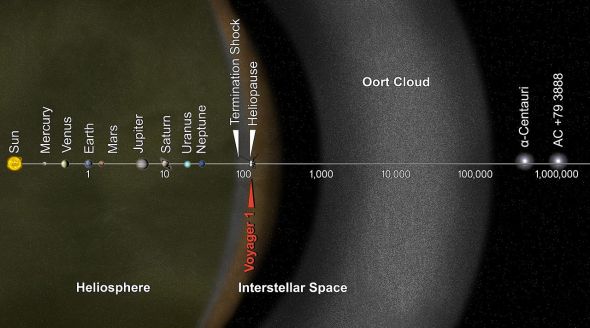 Poor Voyager, he just can’t catch a break. We’ve said it’s hit interstellar space more times than we want to admit and in 2012, the Voyager mission team announced that the Voyager 1 spacecraft had passed into interstellar space [confirmed late 2013], traveling further from Earth than any other man-made object.

But, in the nearly two years since that historic announcement, and despite subsequent observations backing it up, uncertainty about whether Voyager 1 really crossed the threshold continues. There are some scientists who say that the spacecraft is still within the heliosphere — the region of space dominated by the Sun and its wind of energetic particles — and has not yet reached the space between the stars.

The scientists predict that, in the next two years, Voyager 1 will cross the current sheet — the sprawling surface within the heliosphere where the polarity of the sun’s magnetic field changes from plus to minus. The spacecraft will then detect a reversal in the magnetic field, proving that it is still within the heliosphere. But, if the magnetic field reversal doesn’t happen in the next year or two as expected, that is confirmation that Voyager 1 has already passed into interstellar space. Complicated for sure, but science has a way of ironing out all the details as data becomes available.

George Gloeckler, a professor in atmospheric, oceanic and space sciences at the University of Michigan in Ann Arbor and lead author of the new study has worked on the Voyager mission since 1972 and has been a vocal opponent of the view that Voyager 1 has entered interstellar space. He said that, although the spacecraft has observed many of the signs indicating it may have reached interstellar space, like cosmic rays, Voyager 1 did not see a change in magnetic field that many were expecting.

“The proof is in the pudding,” Gloeckler said “This controversy will continue until it is resolved by measurements,” .

A little background for anyone who doesn’t know the Voyager program. Voyager 1 and 2 spacecrafts were launched in 1977 to study Jupiter and Saturn. The mission has since been extended to explore the outermost limits of the Sun’s influence and beyond. Voyager 2, which also flew by Uranus and Neptune, is still on its way to interstellar space. 1977 and still going, here’s hoping that we can achieve similar long running missions in our lifetime.

Gloeckler and co-author, Len Fisk, also a professor in atmospheric, oceanic and space sciences at the University of Michigan, are basing their new test on a model they developed earlier this year. Their new model assumes that the solar wind is slowing down and, as a result, that the solar wind can be compressed. Based on this assumption, the study says Voyager 1 is moving faster than the outward flow of the solar wind and will encounter current sheets where the polarity of the magnetic field will reverse, proving that the spacecraft has not yet left the heliosphere. The scientists predict this reversal will most likely happen during 2015, based on observations made by Voyager 1.

“If that happens, I think if anyone still believes Voyager 1 is in the interstellar medium, they will really have something to explain,” Gloeckler said. “It is a signature that can’t be missed.”

This recent paper differs from other models of the solar wind and the heliosphere and is among the new models that the Voyager team will be studying as more data are acquired by Voyager.

Alan Cummings, a senior research scientist at California Institute of Technology in Pasadena and a co-investigator on the Voyager mission, believes Voyager 1 has most likely crossed into interstellar space. But he also is careful to admit there is a possibility that Gloeckler and Fisk are right and the spacecraft is still in the heliosphere. He said that if Voyager 1 experiences a current sheet crossing like the one being proposed in the new study, it could also mean that the heliosphere is expanding and crossed the spacecraft again.

“If the magnetic field had cooperated, I don’t think we’d be having this discussion,” Cummings said. “This is a puzzle. It is very reasonable to explore alternate explanations. We don’t understand everything that happened out there.”

Stephen Fuselier, director of the space science department at the Southwest Research Institute in San Antonio, Texas [who is not involved with the research and is not on the Voyager 1 team] said the scientists have come up with a good test to prove once and for all if Voyager 1 has crossed into interstellar space. Of course he does not agree with the assumption that the paper is making about the how fast the solar wind is moving. But, he also says there is no way to measure this flow velocity, and if Gloeckler and Fisk’s assumptions are correct, the model makes sense and Voyager 1 could still be inside the heliosphere.

“I applaud them for coming out with a bold prediction,” said Fuselier, who works on the Interstellar Boundary Explorer mission that is examining the boundary between the solar wind and the interstellar medium. “If they are right, they are heroes. If they are wrong, though, it is important for the community to understand why … If they are wrong, then that must mean that one or more of their assumptions is incorrect, and we as a community have to understand which it is.”

“If you go back 10 years and talk to the Voyager people, they would have told you 10 years ago that what they would see upon exiting the heliosphere is very, very different from what they are seeing now,” Fuselier said. “We are just loaded down with surprises and this might be one of them.”

The moral of the story is, of course, that sometimes things don’t go according to plan. Our understanding of how interstellar space acts and where it starts is obviously still up for debate. Poor Voyager, we always seem to be moving the goal posts back just a little further every time he thinks he’s made it.

This entry was posted on July 23, 2014 by The Lunatic. It was filed under Classical Physics, Space and was tagged with astronomy, Math, NASA, peer reviewed, physics, science, voyager 1.