Artificial ‘plants’ could fuel the future 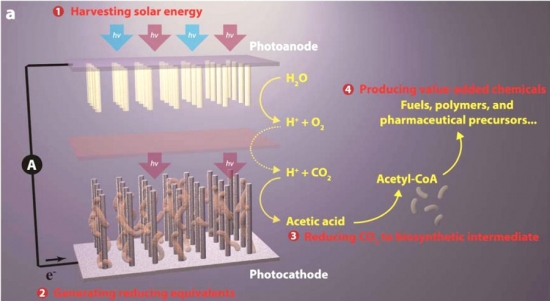 Imagine creating artificial plants that make gasoline and natural gas using only sunlight. And imagine using those fuels to heat our homes or run our cars without adding any greenhouse gases to the atmosphere. By combining nanoscience and biology, researchers led by scientists at University of California, Berkeley, have taken a big step in that direction.

Peidong Yang, a professor of chemistry at Berkeley and co-director of the school’s Kavli Energy NanoSciences Institute, leads a team that has created an artificial leaf that produces methane, the primary component of natural gas, using a combination of semiconducting nanowires and bacteria. The research builds on a similar hybrid system, also recently devised by Yang and his colleagues, that yielded butanol, a component in gasoline, and a variety of biochemical building blocks.

The research is a major advance toward synthetic photosynthesis, a type of solar power based on the ability of plants to transform sunlight, carbon dioxide and water into sugars. Instead of sugars, however, synthetic photosynthesis seeks to produce liquid fuels that can be stored for months or years and distributed through existing energy infrastructure.

In a roundtable discussion on his recent breakthroughs and the future of synthetic photosynthesis, Yang said his hybrid inorganic/biological systems give researchers new tools to study photosynthesis — and learn its secrets.

“We’re good at generating electrons from light efficiently, but chemical synthesis always limited our systems in the past. One purpose of this experiment was to show we could integrate bacterial catalysts with semiconductor technology. This lets us understand and optimize a truly synthetic photosynthesis system,” he told The Kavli Foundation.

The stakes are high.

“Burning fossil fuels is putting carbon dioxide into the atmosphere much faster than natural photosynthesis can take it out. A system that pulls every carbon that we burn out of the air and converts it into fuel is truly carbon neutral,” added Thomas Moore, who also participated in the roundtable.

Moore is a professor of chemistry and biochemistry at Arizona State University, where he previously headed the Center for Bioenergy & Photosynthesis.

Ultimately, researchers hope to create an entirely synthetic system that is more robust and efficient than its natural counterpart. To do that, they need model systems to study nature’s best designs, especially the catalysts that convert water and carbon dioxide into sugars at room temperatures.

“This is not about mimicking nature directly or literally,” said Ted Sargent, the vice-dean of research for the Faculty of Applied Science and Engineering at University of Toronto. He was the third participant in the roundtable.

“Instead, it is about learning nature’s guidelines, its rules on how to make a compellingly efficient and selective catalyst, and then using these insights to create better-engineered solutions.”

“Today, nature has us beat,” Sargent added. “But this is also exciting, because nature proves it’s possible.”

This entry was posted on September 8, 2015 by The Lunatic. It was filed under Engineering, Environment and was tagged with biomedical engineering, energy sources, environmental health, fossil fuels, global warming, nanotechnology, peer reviewed, science, semiconductors.