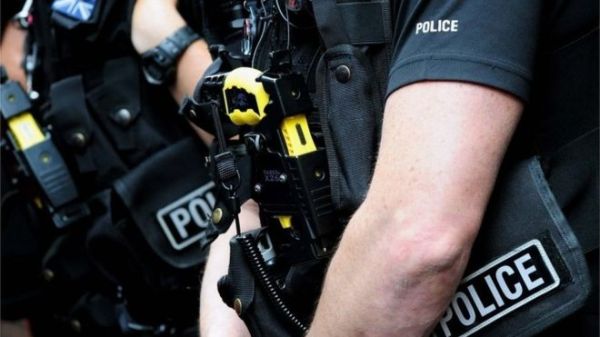 More than two million citizens have been Tased by police as Taser stun guns have become one of the preferred less-lethal weapons by police departments across the United States during the past decade. But what does that 50,000-volt shock do to a person’s brain?

Despite widespread adoption by law enforcement – stun guns are now used in 17,000 police departments – little is known about exactly how the shocks affect individuals’ cognitive functioning, or, more specifically, how receiving an electric shock from a Taser might affect the ability of a suspect to understand and waive their Miranda rights.

New research from a first-of-its-kind human study reveals that the burst of electricity from a stun gun can impair a person’s ability to remember and process information. In a randomized control trial, volunteer participants were subjected to Taser shocks and tested for cognitive impairment. Some showed short-term declines in cognitive functioning comparable to dementia, raising serious questions about the ability of police suspects to understand their rights at the point of arrest.

The study informs public policy in the area of police interrogations, specifically addressing the length of time police departments might wait before interviewing suspects who have been Tased by police officers.

“If suspects are cognitively impaired after being Tased, when should police begin asking them questions? There are plenty of people in prison who were Tased and then immediately questioned. Were they intellectually capable of giving ‘knowing’ and ‘valid’ waivers of their Miranda rights before being subjected to a police interrogation?”

“We felt we had moral imperative to fully understand the Tasers’ potential impact on decision-making faculties in order to protect individuals’ due process rights.”

To examine the effects of the Taser, the researchers recruited 142 participants who were required to undergo intensive screening protocols, including those for drug use and cardiac and psychiatric problems. The randomized control trial was conducted at a hospital, with nurses and a physician on hand in case of emergency.

Each participant completed a battery of cognitive instruments at a preliminary screening stage, immediately before treatment exposure, immediately after completion of their treatment condition, one hour later and one week later. The research team assessed participants’ scores both within and across groups over time to assess change in cognitive functioning.

Participants showed the greatest variability on the Hopkins Verbal Learning Test, which can indicate anything from mild learning impairments to dementia by measuring a person’s ability to learn new information (a string of words) and then recall that information after different intervals of time. The results indicate that Taser exposure caused statistically significant reductions in verbal learning and memory. The effects lasted, on average, less than one hour.

While short-term, the severity of the disruption was considerable, according to the researchers. The mean score for each group at pre-test was 26 – just above the national average. At post-test, one quarter of each Taser group scored below 20 on the HVLT, which represents the mean level cognitive functioning for 79-year-old adults, placing participants within the range of mild cognitive impairment.

White said “our test administrators could clearly observe the difficulty many participants had with the HVLT after TASER exposure.”

“Tasers are a great alternative to deadly force. When used in lieu of firearms, Tasers can save lives,” said Kane. “But using a Taser is not without risk. Although they are considered safe when used on healthy people, people have died from being Tased. They should be treated as a dangerous weapon.”

“Being shocked had a traumatic effect on some participants,” said Kane. “Some were emotionally debilitated by the experience.”

The researchers point out that study participants were high-functioning, healthy young people who were accustomed to test taking and were sober and drug free at the time they were Tased, and thus, were functioning at a much higher level of cognition than do the ‘typical’ suspects in the field who experience Taser exposure at the hands of police officers.

“We would expect ‘typical’ suspects – who may be high, drunk or mentally ill and in crisis at the time of exposure – to experience even greater impairment to cognitive functioning as the result of Taser exposure,” said Kane.”

The questions driving this study involve serious issues including constitutionally protected rights of the accused, use of force by police and previously unexamined effects of the Taser on the human body.

“When police take suspects into custody, they read them their Miranda rights, which state that suspects have the right to remain silent, and anything they say can and will be used against them in a court of law,” said Kane.

“The findings from this study suggest that people who have been shocked with a Taser may be unable to understand and rationally act upon his or her legal rights, and may be more likely to waive their Miranda rights directly after Taser exposure or to give inaccurate information to investigators. These decisions can have profound impact on an eventual judicial finding of guilt or innocence.”

The researchers suggest a public dialogue about how to best integrate the Taser into everyday lawful policing in ways that maintain officer safety while reducing potential social costs incurred by suspects exposed to a Taser discharge.

They ask: “What would it cost police to wait 60 minutes after a Taser deployment before engaging suspects in custodial interrogations?”