What is a good death? 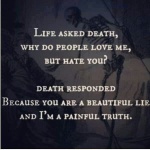 Food for the worms, a dirt nap, kicking the bucket, maybe there are so many euphemisms for death because it is still a taboo in certain cultures. Not so fun fact, my Uncle committed suicide some years back. I’m not going to go into details, but because suicide is looked down on, was his death still considered a “good death”? Trying to qualitatively and quantitatively define a good death, researchers have published a new paper offering help in defining the idea of a good death and have ultimately identified 11 core themes associated with dying well.