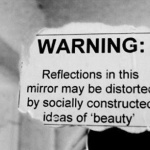 We’re constantly bombarded by advertisements telling us we are too fat, too thin, not curvy enough, not flat enough — or more often than not — simply not enough. It shouldn’t be a surprise to see that effect our day to day life, like it or not — and it has. Researchers have just published results from a national study on the factors linked to satisfaction with appearance and weight.

END_OF_DOCUMENT_TOKEN_TO_BE_REPLACED

Imagine looking in the mirror and not seeing yourself. Imagine losing weight and seeing a lower number on the scale, but when looking in the mirror you are still just as fat. Suffering from anorexia or other body dysmorphic disorders live like that daily. They literally don’t see what you and I might see when we look at them. It’s not their fault and a new study suggests that people suffering from anorexia or body dysmorphic disorder have similar abnormalities in their brains that affect their ability to process visual information.