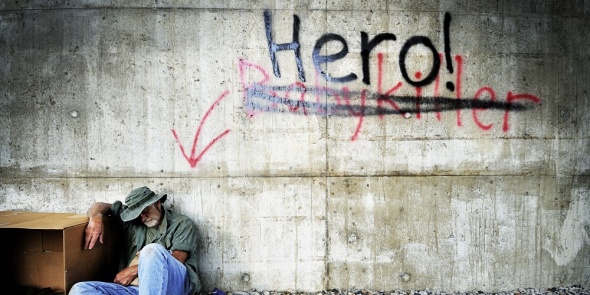 Before PTSD had a name there was shellshock. It was mysterious and much like today, not everyone showed symptoms so — for the most part — it was written off. In recent years however, public health concerns about post-traumatic stress disorder (PTSD) have risen significantly, driven in part by affected military veterans returning home. While this has opened the door for better care for people suffering from PTSD, it has also lead to some startling revelations about the extent of damage. New research that was just released, sad to say, doesn’t bode well for people with PTSD either.

PTSD is associated with number of psychological maladies, among them chronic depression, anger, insomnia, eating disorders and substance abuse. Research has shown that people with PTSD, much like those suffering from depression, have changes to the brain that are visibly different from a “healthy” brain.

New research also released suggests that people with PTSD may also be at risk for accelerated aging, or premature senescence.

“This is the first study of its type to link PTSD, a psychological disorder with no established genetic basis, which is caused by external, traumatic stress, with long-term, systemic effects on a basic biological process such as aging,” said Dilip V. Jeste, MD, senior author of this study.

Researchers had previously noted a potential association between psychiatric conditions, such as schizophrenia and bipolar disorder, and acceleration of the aging process. Because of that link, the team was determined to see if PTSD might show a similar association by conducting a comprehensive review of published empirical studies relevant to early aging in PTSD, covering multiple databases going back to 2000.

Unfortunately there is no standardized definition of what constitutes premature or accelerated senescence. So for guidance, the researchers looked at early aging phenomena associated with non-psychiatric conditions, such as Hutchinson-Gilford progeria syndrome, HIV infection and Down’s syndrome. The majority of evidence fell into three categories: biological indicators or biomarkers, such as leukocyte telomere length (LTL), earlier occurrence or higher prevalence of medical conditions associated with advanced age and premature mortality.

In their literature review, the UC San Diego team identified 64 relevant studies; 22 were suitable for calculating overall effect sizes for biomarkers, 10 for mortality.

All six studies looking specifically at LTL found reduced telomere length in persons with PTSD. Leukocytes are white blood cells, and telomeres are stretches of protective, repetitive nucleotide sequences at the ends of chromosomes. These sequences shorten with every cell replication by design and are considered a strong measure of the aging process in cells.

Seven of 10 studies indicated a mild-to-moderate association of PTSD with earlier mortality, consistent with an early onset or acceleration of aging in PTSD.

“These findings do not speak to whether accelerated aging is specific to PTSD, but they do argue the need to re-conceptualize PTSD as something more than a mental illness,” said first author James B. Lohr, MD, professor of psychiatry.

“Early senescence, increased medical morbidity and premature mortality in PTSD have implications in health care beyond simply treating PTSD symptoms. Our findings warrant a deeper look at this phenomenon and a more integrated medical-psychiatric approach to their care.”

Barton Palmer, PhD, professor of psychiatry and a coauthor of the study, cautioned that,

The outlook does not look promising, but because the discoveries are being made, there is at least hope for treatment. If you or a loved one suffers from PTSD, depression, anxiety, or any other mental health issue there is help out there.

The VA offers a crisis-line, you can find the number and more information here.

This entry was posted on May 8, 2015 by FullMetal. It was filed under Neuroscience Research, Psychology and was tagged with aging, gerontology, Mental Health Stuff, neurobiology, neurochemistry, neurology, peer reviewed, PTSD, science, sleep disorders.