Can you trust your gut when public speaking? 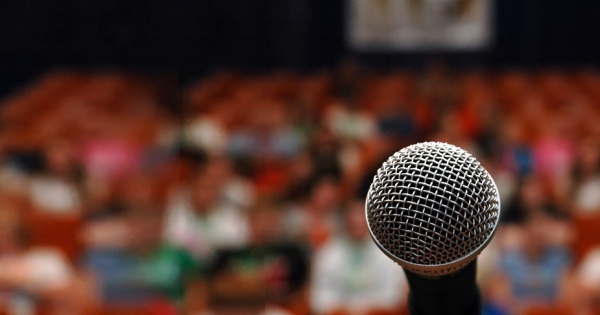 There is good news for frequent public speakers. New research shows that individuals have the ability to quickly and accurately identify a crowd’s general emotion as focused or distracted, suggesting that we can trust our first impression of a crowd’s mood.

“When we look at a crowd of faces, what we see is not a bunch of individual faces, but rather an average of the entire crowd,” said author Jason Haberman, PhD, of Rhodes College, Department of Psychology, who led the study.

“However, how do we know whether this average is reliable? If half the faces are happy and the other faces are angry, it would not be advantageous to see the ‘neutral’ average.”

In a series of experiments, observers were given only one second to interpret how emotionally uniform (or diverse) faces were in an image of a crowd. Observers were consistently able to identify emotionally uniform crowds, such as all happy faces, as well as emotionally diverse crowds like one would see in a distracted audience. The results suggest the brain has evolved to quickly grasp information only a crowd can provide.

“Because crowds convey such important social information, it makes sense that humans are exceedingly sensitive to the average expression in crowds of faces,” the authors wrote.

The scientists did several other experiments to rule out other visual cues, such as brightness and facial orientation. The results consistently suggested that the brain interprets facial cues to determine the level of a crowd’s emotional focus.

This entry was posted on January 19, 2016 by The Lunatic. It was filed under Neuroscience Research, Psychology and was tagged with behavioral science, cognitive processes, lifestyle, Mental Health Stuff, neurology, ophthalmology, peer reviewed, psychology, science.