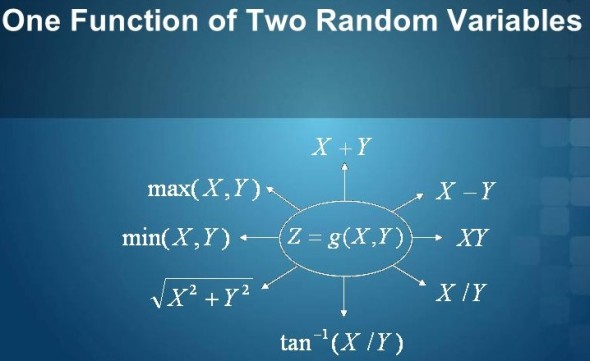 Hopefully at this point we’ve demystified more than just a few concepts at this point. Today we are going to look at one function of two random variables. Originally I was going to break into a joint CDF example that involved dependent variables, but it turns out my book doesn’t cover that! Oops, guess I should’ve read ahead. In any case let’s talk functions!*

For the last couple of posts we’ve talked joint CDF and how to find a joint pdf. This has made solving our equations easier because we could solve for the probabilities of each individual random variable thanks to the property of independence that we originally introduced back in this post. That is handy, but since we don’t have any good examples of joint CDF that are dependent we need to jump topics.

Thankfully, this looks a lot like one function of one random variable and the way we solve is fairly similar. Let’s look at a easier example of this. Say we have our old friends, the random variables X and Y, which are jointly continuous with the joint pdf that looks like this

Well let’s do the math and walk through the steps after, you’ll see that 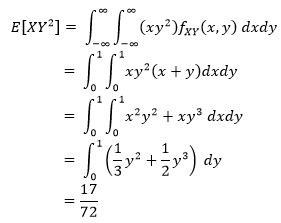 At first glance you may wonder where the first set of variables came from, well our expected value operator needs to get included here, what you are looking at is the form we use to solve these types of problems, which says that

I could have introduced this first, but I think seeing it in action first (at least for me) makes it easier to see how it works. So we have our g and f functions, (step 1). Next, we swap out our f for the actual function x+y and set the limits to our integration to 0 and 1 since that is where our function lives (step 2). Now since everything is in terms of x and y we can distribute (don’t forget to foil) and you come out with what you see (step 3).

If you never worked with a double integral, it is the same as a single integral, except you do it twice, once for the first variable and then again for the second, so we do this for our x variable and we get our new equation (step 4). Lastly, we need to integrate this once more for y, and plug in out limits of integration to determine the final solution (step 5).

There you have it! We’ve introduced one function of two random variables. Don’t worry, we can go over another example tomorrow and I’ll double check my class notes this time so I don’t give any wrong spoilers away about the next post in the future. Again, oops, but in any case, I have an exam coming shortly so we’re going to cover everything on the exam prior to it happening. At that point we will be caught up to my class and it should be smooth sailing until December when class ends.