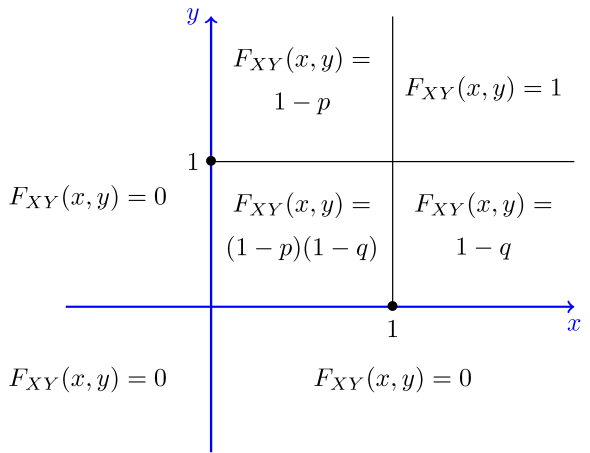 We’re getting into some interesting things today!

Well here we are again, today we are talking functions of two random variables. If you’re looking for the beginning, this isn’t it, but you can read the introduction here. If you’ve kept up, then you’re ready to go over the example we have today, so let’s get started.*

Now that we are up to speed, let’s take a look at an example of two random variables. Now this won’t be our first example, we did that here. However, this will be slightly more complex. The previous example and this example will both be using independent random variables, we can look at dependent examples soon, but we should go over at least one more example before we start diving into more complex examples.

First let’s look at the range of X and Y, based on what we were given we know that

also, remember that we said the random variables X and Y were independent, meaning we are really dealing with two single variable equations multiplied together, in other words

However, this is just our pdf, we also want to find our CDF and we do that the same way we’ve done the other examples, by saying

Next we find the limits of our function like we did for the pdf, since we know that 0 ≤ X, Y ≤ 1 we also know that

So three cases, and three solutions. Now we just need to find the in between bit (like we’ve done previously). First let’s look at the case when 0 ≤ x < 1 and y ≥ 1 for that case we have

So basically the same solution steps we use when we solve these types of equations and you’ll see something similar when we go onto dependent variables. If you look at the plot at the top, you’ll see where each of these cases fall. Something to remember, these types of problems usually are in three-dimensional space, however we used bernoulli so we could collapse the example to two-dimensions.

Next up, dependent variables! However, getting into that means adding complexity, so hopefully the example today helps clarify some of the solving process for at least this case where the two variables are independent.