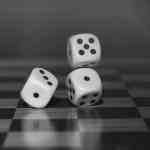 Pick a number between one and ten. You picked the number seven. Was I right? Doesn’t matter, the point is there’s a slim chance you picked one or ten. The reason is simply because humans are bad at random number generating. Fear not! Computers are bad at it too, but that’s a problem for a world that revolves around cyber security. Randomness is so important to our daily lives, that we don’t even notice it… mostly.

END_OF_DOCUMENT_TOKEN_TO_BE_REPLACED

The year I met Alice

Every year around this time I think of Alice (not her real name). Alice and I have a lot in common. We have the same last name, same initials, and we had no idea the other existed until one day when I randomly checked my email and discovered a serious case of mistaken identity. That was my introduction to Alice, so every year I think about her and wonder how she’s doing. But my dear reader, the story isn’t about the emails. The story is about what happened next.