Beam me up! Teleporting the memory of an organism

In “Star Trek”, a transporter can teleport a person from one location to a remote location without actually making the journey along the way. Such a transporter has fascinated many people. Quantum teleportation shares several features of the transporter and is one of the most important protocols in quantum information.

END_OF_DOCUMENT_TOKEN_TO_BE_REPLACED

Physicists show ‘molecules’ made of light may be possible

It’s not lightsaber time… at least not yet. But a team including theoretical physicists from the National Institute of Standards and Technology (NIST) has taken another step toward building objects out of photons, and the findings* hint that weightless particles of light can be joined into a sort of “molecule” with its own peculiar force.

END_OF_DOCUMENT_TOKEN_TO_BE_REPLACED

Cell phone notifications may be driving you to distraction

Whether you are alerted to an incoming phone call or text by a trendy ringtone, an alarm bell or a quiet vibration, just receiving a notification on your cell phone can cause enough of a distraction to impair your ability to focus on a given task. In fact, the distraction caused by a simple notification — whether it is a sound or a vibration — is comparable to the effects seen when users actively use their cell phones to make calls or send text messages, the researchers found.

END_OF_DOCUMENT_TOKEN_TO_BE_REPLACED

A glass fiber that brings light to a standstill 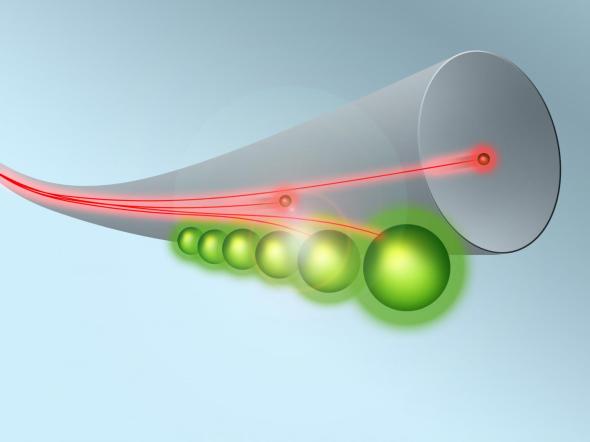 Atoms coupled to a glass fiber: A system that can slow down light dramatically.
Image credit goes to: TU Wien

Light is an extremely useful tool for quantum communication, but it has one major disadvantage: it usually travels at the speed of light and cannot be kept in place. A team of scientists at the Vienna University of Technology has now demonstrated that this problem can be solved – not only in strange, unusual quantum systems, but in the glass fiber networks we are already using today.