Hobby Lobby and the War on Race and Women 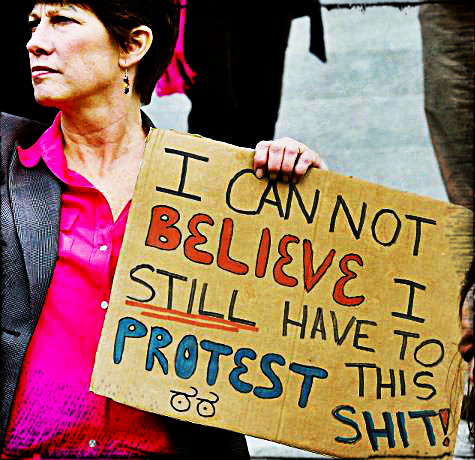 There is a war going on and it’s not on foreign soil. This war is the fight for the status quo, a war where you are only worth your skin color, a war where you are only worth as much as your gender. This war is all around us, we see it everyday, yet we let it quietly pass us by. We do this because, in all actuality, we are losing this war. I don’t blame you if you don’t believe me, you shouldn’t. Frankly I would read this to see the history of this war in action. But where that post focused more on color, I am going to be focusing more on gender and it isn’t pretty.

Despite your personal beliefs the supreme court already ruled on the legality of abortion, yet certain states are making it harder, if not impossible for women to be able to have the procedure. The obvious solution would be then to provide some sort of contraceptive, any sort of birth control would effectively  avoid the religiously charged abortion topic.

For the longest of time women had to pay for contraceptive, it was not typically covered by insurance. Strangely enough, viagra and other male oriented drugs were, and still are covered without any challenge. The Affordable Care Act requires private insurance plans — except those grandfathered or exempted due to employers’ religious beliefs — to provide women with access to all FDA-approved contraceptive methods without cost-sharing.

This first-dollar coverage “has the potential to dramatically shift contraceptive use patterns, to reduce the U.S. unintended pregnancy rate … and to improve the health of women and families,” wrote Carol S. Weisman, Distinguished Professor of Public Health Sciences and Obstetrics and Gynecology, and Cynthia H. Chuang, associate professor of medicine and public health sciences.

The term “First-dollar coverage” means that women will not pay anything out-of-pocket for their office visits or contraceptive methods — no copays and no deductibles — because these costs will be covered by health insurance. Strange that they weren’t before, right?

Challenges beyond employer objections that could slow privately insured women’s full use of contraceptive benefits are the focus of a recent commentary by a group of women’s health experts. The researchers also offer suggestions for “making the most of first-dollar contraceptive coverage” in light of the hobby lobby ruling and other erosions to womens health laws.

In particular, evidence suggests more women will choose highly effective long-acting reversible contraceptives (LARCs), such as intrauterine devices (IUDs), that previously would have been too expensive.

Sadly, cost is not the only barrier women face when considering their contraceptive options. Many women may be uncertain about what their plans cover or unaware of the attributes of various methods now within their financial reach, according to Weisman and Chuang. Not only that, their primary care providers may not be trained in the provision of LARCs, and insertion of IUDs and implants may require referrals to obstetrician-gynecologists.

To address these challenges, the researchers recommend clear communication to the public about the Affordable Care Act contraceptive coverage mandate and to private-plan enrollees about their plans’ contraceptive coverage. They also recommend training primary-care providers and creating seamless referral arrangements between these providers and those who can provide LARCs.

Furthermore, Weisman and Chuang call for the “design, assessment and dissemination of woman-centered information and decision tools to help women make optimal contraceptive choices in the context of their own life circumstances and preferences.” Their commentary offers examples of current initiatives in Massachusetts and Pennsylvania to develop and disseminate such decision tools.

“All of the publicity about the Supreme Court’s Hobby Lobby decision may have confused women who have first-dollar coverage through their employer’s health insurance or through the new exchanges,” said Weisman. “Women need accurate information about their coverage and about their contraceptive options so that they can obtain whatever contraceptive method best meets their needs. Avoiding unintended pregnancy is a key component of women’s health that we should not lose sight of.”

Racism and sexism are still very much alive here in the US. But instead of running around using racial slurs, organizing lynchings, and beating women these people have moved on to become our senators, mayors, or judges. They don’t shout from the rooftops that white is right, or that having a penis makes us better than women, no. Now they just write it into laws, they allow the death of young, unarmed black men. They allow the separation of church and state to become blurred so that I can force my religious beliefs onto you, but only if you are a woman.

They stopped trying to act “outside” of the system, now these people are the system. To this, the only advice I can offer is vote. Let your voice be heard and find ways to change the status quo for the better, you have the power to affect change, not just the people with tons of money. That is the beauty of our system, your vote counts just as much as theirs does.

In any case, women finally have access to birth control that is affordable… for now.

This entry was posted on August 19, 2014 by The Lunatic. It was filed under Ethics, Politics and was tagged with health, hobby lobby, medicine, political issues, racism, science, sexism, womans rights.