The development of the cerebellar circuitry is driven by epigenetic “music” 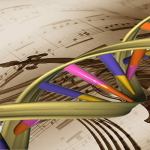 From before birth through childhood, connections form between neurons in the brain, ultimately making us who we are. So far, scientists have gained a relatively good understanding of how neural circuits become established, but they know less about the genetic control at play during this crucial developmental process. Now, a team of researchers has described for the first time the so-called epigenetic mechanisms underlying the development of the cerebellum, the portion of the brain that allows us to learn and execute complex movements.