Everyone does it …no, not poop, but fart. Passing gas, fuming, crop dusting, cracking a rat — no matter what you call it — everyone fart, but why? Researchers have published an article devoted to the review of gaseous neurotransmitters of microbial origin and their role in the human body.

“Our brain uses gases such as hydrogen sulfide, ammonia, and even carbon monoxide to transfer information between cells,” Alexander Oleskin said.

“Bacteria that inhabit our body (and especially the intestine), also form gasotransmitters that affect our brain, mind and behavior.”

Gasotransmitters are gaseous substances produced in various organs and tissues. The name “gasotransmitters” is related to the term “neurotransmitters“. These are substances that serve for the transmission of impulses between nerve cells, including the brain, where such gas transmitters as NO, CO and H2S are generated by means of special enzymes.

The review provides an extensive analysis of the data related to the mechanisms of action of gaseous substances of microbial origin. They are considered as regulators of the human behavior, neurophysiological and mental disorders.

These gases are among the smallest biologically active molecules which perform vital functions of both multi-cellular organisms and bacteria.They act as mediators and regulators in intercellular interactions in the bodies of mammals. 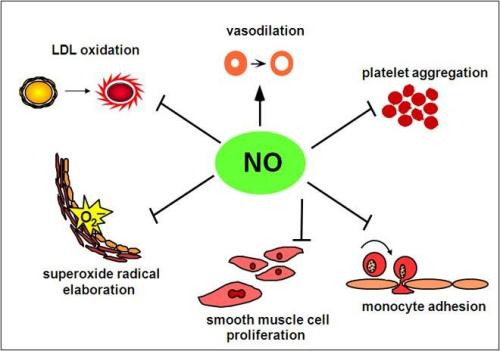 Functions of nitric oxide (NO) in the human organism.
Image credit goes to: The Lomonosov Moscow State University

Importantly, substances that act as gasotransmitters are synthesized in the gastrointestinal tract both by the cells of the host organism and a variety of gastrointestinal microorganisms that inhabit it.

Their numbers vary depending on the human’s diet. The gaseous products are formed as the result of various eukaryotic (human) and prokaryotic (bacterial) cells’ activity by enzymatic or non-enzymatic processes, and can also be gripped together with air and food. The majority of the gas molecules is removed from the intestines: they are absorbed and transferred to the bloodstream, and eventually removed from the body through the respiratory system.

Gasotransmitters play a dual role in the body. They may serve as energy sources for the inhabiting microbes. For instance, a typical symbiont is the intestinal bacterium Escherichia coli (E. coli), which lives in the digestive tract, using nitric oxide (NO) generated by the host cells as an energy source for their own metabolism. As nitric oxide is also produced actively by the immune cells during inflammation, it turns out that E. coli is ‘interested’ in the development of an inflammation in the intestines.

Gasotransmitters are involved both in the communication between microbial cells and the “dialogue” between the microbial “life partners” and the host cells. The nitric oxide (NO) produced by the host organism or microbes regulates the functioning of the immune and cardiovascular systems and acts as a brain neurotransmitter involved in the regulation of learning and cognitive activities. Under experimental conditions, mice deficient in one of the nitric oxide forming enzymes (neuronal NO-synthase) exhibit increased motor and sexual activity and long-term depression.

Hydrogen sulphide (H2S) at low concentrations regulates a number of processes in various human organs, especially the cardiovascular and nervous systems. Hydrogen sulfide acts as a neuroprotector: the effect of its insufficient concentration on the nervous system was demonstrated in studies with patients with epileptic seizures, psychiatric disorders, or pathological changes in the electroencephalogram. Many of these patients are deficient in enzymes which produce hydrogen sulfide in the body. Patients with the Down syndrome, by contrast, have an increased activity of the enzymes that form hydrogen sulfide.

An excess of ammonia (NH3) in the body (hyperammonemia), may be due to disorders in the gastrointestinal tract microbiota (dysbiosis). It results in accumulation of significant concentrations of NH3 in the brain. This situation is characteristic of liver cirrhosis and poses the threat of hepatic encephalopathy.

The concentrations and activities of gas transmitters are under a combined influence of the brain and the entire nervous system (including intestinal nerve cells that constitute the enteric nervous system), the immune system.They are also influenced by the gastrointestinal microbiota and that of other body areas (the skin, the respiratory tract, the urogenital tract etc.).

“Prospectively the research findings will be implemented in medical and psychiatric practice. They will serve for the treatment and prevention of neuropsychiatric disorders (including depression, increased aggressiveness, and others) using microbial gas transmitters.”

“It seems feasible for instance, to attempt to normalize the amount of ammonia with the help of bacteria that will be introduced into the body in a goal-directed fashion,” hypothesizes Alexander Oleskin.

There are some developments in this direction. They are based on useful microorganisms, i.e., probiotics that can be consumed with milk products (yoghurt, cheese etc.), or in pharmaceutical formulations. The novelty lies in the approach to the use of such probiotics: they help administering potentially poisonous gases in minute amounts to improve human health and promote adequate behavior.

The term ‘psychobiotics‘ has recently been introduced to designate the probiotic bacterial strains that are used as dietary supplements to optimize functioning of the brain and the whole body activities by making good use of h the beneficial effects of microbial products, including gas transmitters, on the brain and behavior.

Sources:
Oleskin, A., & Shenderov, B. (2016). Neuromodulatory effects and targets of the SCFAs and gasotransmitters produced by the human symbiotic microbiota Microbial Ecology in Health & Disease, 27 DOI: 10.3402/mehd.v27.30971

This entry was posted on July 26, 2016 by The Lunatic. It was filed under Biology, Neuroscience Research and was tagged with behavior, cell biology, health, medicine, neurobiology, neurology, peer reviewed, psychology, science.