Last post we said that parametric statistical tests use the mean values of the data to determine if there is a difference between two (or more) data. We looked at something called a T-test a concept we will dive into in more detail in the future, but for now we said that a t-test compares two groups and is one of the tests we can use to figure out if we have statistically different datasets or if the separation is artificial (IE- a coin that we think is bias, but is actually not bias). We also introduced the idea of the mean without explicitly defining it and we should resolve that today. Today we are also going to introduce the concept of the median, which may be confusing if we don’t have a good definition for the either the mean or median. That said, let’s define both!

First let’s talk about the mean.

The mean value of a dataset is just the average of that dataset.

where:
x is our dataset
n is the number of data points

We had an outlier, this is why we have two different statistical approaches. Our data was most definitely not normally distributed (at least not with the number of data points we have). However, nonparametric statistics does not have this issue, for one thing, we can use the given dataset to determine the distribution prior to analysis, but more importantly nonparametric tests use the median of the data.

This may be more basic than you need, but just to be thorough let’s define the concept of the median. Afterwards, we can go into how that relates to nonparametric statistics.

The median value of a dataset is just the middle value of that dataset.

So far so good, but what happens when we have a dataset with an even number of values? To use our previous example, we can take the median of a, which we find by finding the middle values of the data. Let’s look at how we do that. First we do what we did before, sort the data by size so we now have a = [1, 4, 6, 10, 20, 20, 39, 210]. If we notice there are two middle values, if we count three values from the left like we did in our previous example, we end at 10. However, if we go three numbers over starting at the right we end at 20. The solution is to use both numbers. In this case the median value is just median(a) = (10+20)/10 = 15. We can write this formula in a more mathematical way by saying that: 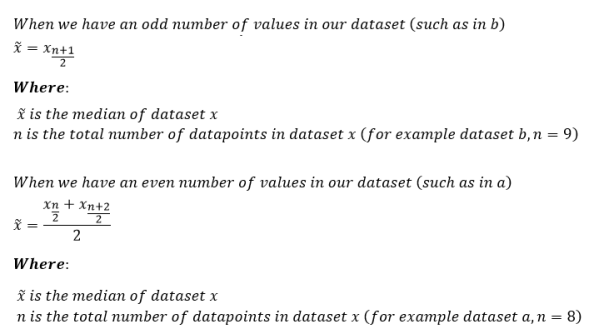 Now we’ve seen that our mean and median are definitely not the same things. We’ve also shown that our mean can be heavily influenced by outliers that are much larger than the average of the rest of the numbers in our dataset.

Why use parametric tests?

First, if we are going to use parametric tests, you need to make sure you satisfy the requirements, namely:

We will go over points 3 and 4 in more detail in other posts.

Why use nonparametric tests?

This should be fairly straight forward. Nonparametric tests should definitely be used when you don’t meet the assumptions needed to use parametric testing. Another good reason is that your data is better represented by the median. Their is a reason we covered mean and median today, sometimes the mean just won’t work when you are analyzing your data and you’ll run the risk of making a type 1 error.

A good example of a real dataset that would be better represented by the median over the mean is income. Think about it, you have people like Jeff Bezos with a net worth of something like 114 billion (with a b, which 1 billion is equal to 1,000 million). This will heavily skew your data and if you try to draw conclusions using the mean instead of median, you may wrongly conclude that American’s are millionaires, which (checks bank account)yeah, still not the case.

At the end of the day, when we are talking statistics we need to look at how our data are best represented. Would it make more sense to talk about the mean of our data or the median of our data? Answering this question will be the most helpful in determining which type of statistical analysis should be used for your data.

Well, this ended up being a bit longer than I thought. Next up I think we will talk about different types of tests. Or maybe we can talk about different types of probability curves. There is just so much we can talk about and it’s all related somehow so it’s tough to decide which topic is best to cover. In any case, today we’ve talked parametric statistical tests and nonparametric statistical tests, so hopefully we’ve cleared up the difference!

This post marks 1000 posts across lab topics. Look at us go!

*As usual, I make no claim to the accuracy of this information, some of it might be wrong. I’m learning, which is why I’m writing these posts and if you’re reading this then I am assuming you are trying to learn too. My plea to you is this, if you see something that is not correct, or if you want to expand on something, do it. Let’s learn together!!