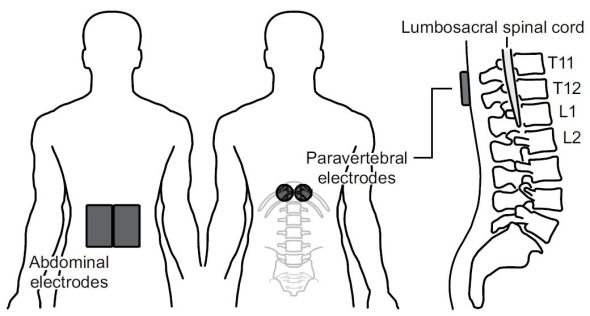 Transcutaneous posterior root stimulation: Paravertebral and abdominal skin electrode placement (this is just a portion of figure 1 of this paper.

Normally I’m somewhat excited to post these, but with everything going on you’ll have to pardon my lack of joy. However, it’s been two weeks so I need to review another paper so I’m sharing it here as well as sending my PI a copy. The study is a few years old, but it’s open access so you can read it if you’re interested. Transcutaneous spinal cord stimulation (TSS) is one part of my research in case you couldn’t tell from all the spinal cord and TSS studies and posts. I find it interesting and it gives me hope that we can help a whole lot of people living with spinal cord injury. Anyway give it a read and get out there and protest for a better world.

With the help of four CCSCI subjects, researchers studied the effects of four different conditions. The first two conditions used a lower limb assistive device which supported 60% of the user’s bodyweight. Participants performed a slow (0.86 steps per second) and fast (1.12 steps per second) walking task with a neutral hip range or an exaggerated hip extension for 10 consecutive gait cycles each condition. For the next conditions, subjects performed the same experiment, however this time researchers also applied 30 Hz TSS at approximately L2 of the spinal cord. Using electromyography (EMG) the researchers recorded activity several muscles: right and left quadriceps, hamstrings, tibialis anterior, and triceps surae.

Statistical analysis was done using pair-wise post hoc tests and Bonferroni corrected. For the first two no-stimulation conditions the researchers found minimal EMG activity of the recorded muscles. Subjects 1 and 3 had no recorded EMG activity when standing, subject 2 had clonic muscle activation and subject 4 had repetitive motor unit firing with occasional bursts in right tibialis anterior. During TSS the researchers found EMG signal improved by a factor of 3.5. The interaction between stimulation and muscle activation was found to be highly significant at P < 0.001. Adding tonic 30-Hz  TSS increased the number of rhythmically responding muscles, augmented thigh muscle activity, and suppressed clonus. They conclude that, “the rhythmic motor patterns generated by the imposed stepping were responses of spinal reflex circuits to the cyclic sensory feedback. Tonic 30-Hz TSS provided for additional excitation and engaged spinal rhythm-generating networks. The synergistic effects of these rhythm-generating mechanisms suggest that TSS in combination with treadmill training might augment rehabilitation outcomes after severe spinal cord injury.”

Because TSS is an emerging tool in the recovery and understanding of spinal cord injury, we still are unsure about what is circuitry is being activated when we stimulate using TSS. This study adds support, but does not answer, two important unknowns involving the spinal cord. The first being, what are we activating when we stimulate the spinal cord using TSS and the second is as humans, do we have a central pattern generator? While this study was not meant to answer either of those questions, it does help add a data more data to answer them.

This study is particularly interesting because despite all four subjects having a CCSCI, there was – in some cases – at least partial volitional control of the lower extremities. Research has already shown that both the brain and spinal cord are plastic and can learn new tasks. By using TSS and an assistive device like the researchers did in this study it is possible that even a damaged spinal cord can learn how to communicate with the brain using reinforcing methods like this study does. While it is still too early to say with confidence this is the case, the study provides more information in our understanding of TSS as a tool for recovery after spinal cord injury.

This entry was posted on June 10, 2020 by The Lunatic. It was filed under 365 Days of Academia - Year one, Critical Reviews and was tagged with neurology, neuroscience, PhD, research, spinal cord.