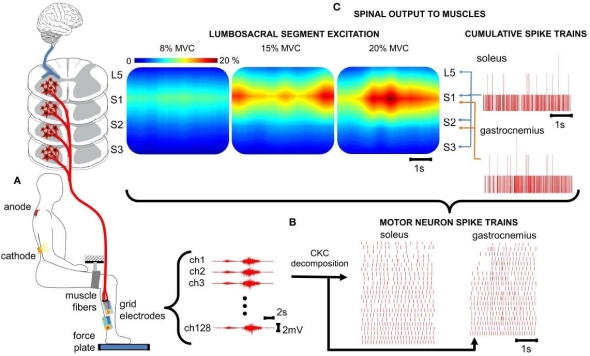 Spatiotemporal spinal maps of ipsilateral a-MNs. (A) Experimental set-up for ankle plantar flexion. (B) HD-EMG is decomposed into a-MN spike trains using a convolutive blind-source separation technique. (C) The spinal output to generate the neural drive to muscles is estimated from the a-MN spike trains.

The world is on fire, we’re protesting for a future, but today I have my review paper due so instead of writing about my frustrations I’m going to share my review. Today we’re looking at the effects of trans-spinal direct current stimulation (tsDCS) on alpha motor neurons and how we can determine that effect using electromyography. It’s actually a very cool paper, the work is well done, and it’s open source so you can read it if you’re interested.

Trans-spinal direct current stimulation (tsDCS) offers a non-invasive approach to improving the clinical outcomes of spinal cord injury. However, just as no two people have the same spinal cord injury, no two people have the same response to the same stimulation. Therefore, one issue with tsDCS is the treatment needs to be tailored to the individual and this is difficult to do even in a clinical setting. By using electromyography (EMG) signals this study demonstrates the feasibility of using deconvolution to decode alpha motor-neuron (a-MN) discharges across multiple lumbosacral segments during isometric plantar flexion and sub-maximal contractions.

The recordings were analyzed offline and were decomposed into a-MN binary spike train consisting of either a zero or one at all time points. A quality control algorithm was used. If the algorithm saw no change or an improvement in the correlation between force and cumulative spike train signals than no relevant neuro-mechanical information was lost. Coherence analysis was also performed across all three time point conditions (pre, t = 0, t = 30) over the nine trials.

They demined that coherence analysis responded sensibly to the tsDCS condition and that delta band coherence decreased at both t = 0 and t = 30. The authors suspect that delta band coherence may indicate increased variability in neural drive to the muscle, possibly due to higher frequency inputs. They go on to suggest that from a neurophysiological view, the observed coherence decrease may underlie a decrease in strength of common synaptic input to the a-MN pools.

While limited in scope the results of the study look promising as a non-invasive way to measure spinal cord a-MN pools. This work could allow clinicians to determine the best, stimulation site, electrode placement, and intervention intensity. The authors plan to do future work to determine if this approach works on other populations, such as able-bodied subjects. What’s particularly interesting is the use of deconvolution to determine spinal cord a-MN pool activity. This type of information would be useful when probing the spinal circuitry and has the potential to be useful for other types of spinal research should the technique be applicable to other populations

This entry was posted on June 24, 2020 by FullMetal. It was filed under 365 Days of Academia, Critical Reviews and was tagged with biology, neurology, neuroscience, PhD, research, spinal, spinal cord, spinal cord injury.