Pesticides used to help bees may actually harm them

Pesticides beekeepers are using to improve honeybee health may actually be harming the bees by damaging the bacteria communities in their guts. The discovery is a concern because alterations can affect the gut’s ability to metabolize sugars and peptides, processes that are vital for honeybee health.

END_OF_DOCUMENT_TOKEN_TO_BE_REPLACED 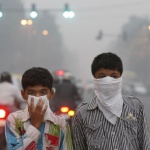 Smog has been a part of modern life since the industrial revolution, unfortunately all that pollution isn’t just hurting the environment — but come on, you saw this coming… right? New research from Sweden indicates that dispensed medication for psychiatric diagnosis can be related to air pollution concentrations. More and more studies show that the brain and human cognitive development are affected by pollution.

END_OF_DOCUMENT_TOKEN_TO_BE_REPLACED

Wikipedia reigns. It’s the world’s most popular online encyclopedia, the sixth most visited website in America, and a research source most U.S. students rely on. But Wikipedia entries on politically controversial scientific topics can be unreliable due to information sabotage.

END_OF_DOCUMENT_TOKEN_TO_BE_REPLACED

More awesomeness like this can be found at theoatmeal.com

Cats are increasingly earning themselves a reputation as wildlife killers with estimates of animals killed every year by domestic cats in the UK numbering into the millions. This new study on the attitudes of cat owners suggests that proposals to keep cats indoors in order to preserve wildlife would not be well received.

END_OF_DOCUMENT_TOKEN_TO_BE_REPLACED

Which is most valuable: Gold, cocaine or rhino horn?

These are elephants in Botswana. Image credit goes to: Blaire Van Valkenburgh

Many of the world’s largest herbivores — including several species of elephants, rhinoceroses, hippopotamuses and gorillas — are in danger of becoming extinct. And if current trends continue, the loss of these animals would have drastic implications not only for the species themselves, but also for other animals and the environments and ecosystems in which they live, according to a new report by an international team of scientists.

END_OF_DOCUMENT_TOKEN_TO_BE_REPLACED

Shale oil has helped the US see lower gas prices and even an opportunity to start exporting. However, it isn’t as great as it might sound, hydraulic fracturing — also known as fracking — has been scrutinized by environmentalists since it’s inception. As it turns out, for good reason, substances commonly used for drilling or extracting Marcellus shale gas foamed from the drinking water taps of three Pennsylvania homes near a reported well-pad leak, according to new analysis from a team of scientists.