The Self Assembling Brain 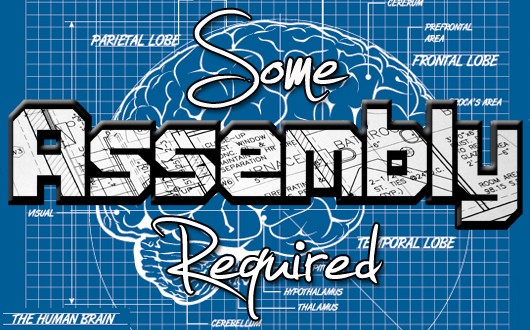 Let’s face it, if the brain were a lego set I would still be staring at the box wondering what I got myself into. So I guess we can just chalk that one up to yet another thing the body can do than I can. When the brain is just developing, special proteins that act like a sort of molecular tugboat. These proteins push or pull on the growing nerve cells, or neurons, helping them organize and placing them in their assigned places amidst the brain’s wiring. Doing a better job organizing all those cells than I ever did organizing my sock drawer.

It may sound odd, but how a single protein can exert both a push and a pull force to nudge a neuron in the desired direction has been a longstanding mystery. One that has only just been solved by a collaboration of scientists.

Researchers have only now released a new study that explains how one guidance protein [called netrin-1 for anyone who want’s to be quizzed after] can either attract or repel a brain cell to steer it along its course. The team used X-ray crystallography to reveal the three-dimensional atomic structure of netrin-1 as it bound to sort of a docking molecule [called DCC] on the axon of a neuron [for those that didn’t want to click the link the axon is the long, thin extension of a neuron that connects to other neurons or to muscle cells, think of it like a phone cord].

As connections between neurons are established — in the developing brain and throughout life — axons grow out from a neuron and extend through the brain until they reach the neuron they are connecting to. To choose its path, a growing axon senses and reacts to different molecules it encounters along the way. One of these molecules, netrin-1, posed an interesting problem for science to solve: an axon can be both attracted to and repelled from this cue. The axon’s behavior is determined by two types of receptors on its tip: DCC drives attraction, while UNC5 in combination with DCC drives repulsion.

“How netrin works at the molecular level has long been a puzzle in neuroscience field,” said Jia-huai Wang, PhD, who led the work at Dana-Farber and Peking University in Beijing “We now provide structure evidences that reveal a novel mechanism of this important guidance cue molecule.” The structure showed that netrin-1 binds not to one, but to two DCC molecules. And most surprisingly, it binds those two molecules in different ways.

“Normally a receptor and a signal are like lock-and-key, they have evolved to bind each other and are highly specific – and that’s what we see in one netrin site,” said Meijers. “But the second binding site is a very unusual one, which is not specific for DCC.”

Of course, not all of the second binding site connects directly to a receptor. Instead, as if it wasn’t complex enough, in a large portion of the binding interface, it requires small molecules that act as middle-men. These intermediary molecules seem to have a preference for UNC5. In other words, if the axon has both UNC5 and DCC receptors, netrin-1 will bind to one copy of UNC5 via those molecules and the other copy of DCC at the DCC-specific site. I know it sounds a bit like alphabet soup, but bear with me.

The researchers found that this triggers a cascade of events inside the cell that ultimately drives the axon away from the source of netrin-1. The team surmised that, if an axon has only DCC receptors, each netrin-1 molecule binds two DCC molecules, which results in the axon being attracted to netrin-1.

“By controlling whether or not UNC5 is present on its tip, an axon can switch from moving toward netrin to moving away from it, weaving through the brain to establish the right connection,” said Zhang.

It may sound like useless knowledge, but knowing how neurons switch from being attracted to netrin to being repelled opens the door to devise ways of activating that switch in other cells that respond to netrin cues, too. A good example of this would be that many cancer cells produce netrin to attract growing blood vessels that bring them nourishment and allow the tumor to grow. So being able to switch off that attraction could starve the tumor, or at the very least prevent it from growing.

On the other hand, when cancers metastasize they often stop being responsive to netrin. In fact, the DCC receptor was first identified as a marker for an aggressive form of colon cancer, and I didn’t say this earlier, but DCC stands for “deleted in colorectal cancer.

“Since colorectal cancer cells have no DCC, they are ‘immune’ to the programmed cell death that would normally follow once they move away from the lining of the gut and no longer have access to netrin. As a result, these tumor cells continue to move into the bloodstream, and metastasize to other tissues. “Therefore, to understand the molecular mechanism of how netrin works should also have a good impact in cancer biology,” said Wang.

Obviously the guidance issue is a very complicated cell biology problem. So what’s next, well researchers are now investigating how other receptors bind to netrin-1, exactly how the intermediary molecules ‘choose’ their preferred receptor, how other guidance molecule binds to DCC, and how the system is regulated. The answers could one day enable researchers to steer a cell’s response to netrin and other guidance cues, ultimately changing its fate. Armed with this ability we could combine this with stem cell technology and reattach nerves by steering them or offer ways to treat developmental deformities.

Really the possibilities are endless!

This entry was posted on August 8, 2014 by FullMetal. It was filed under Biology, Neuroscience Research and was tagged with health, medicine, neurology, peer reviewed, science.