Depressed parents cause anxiety and bad behavior in toddlers 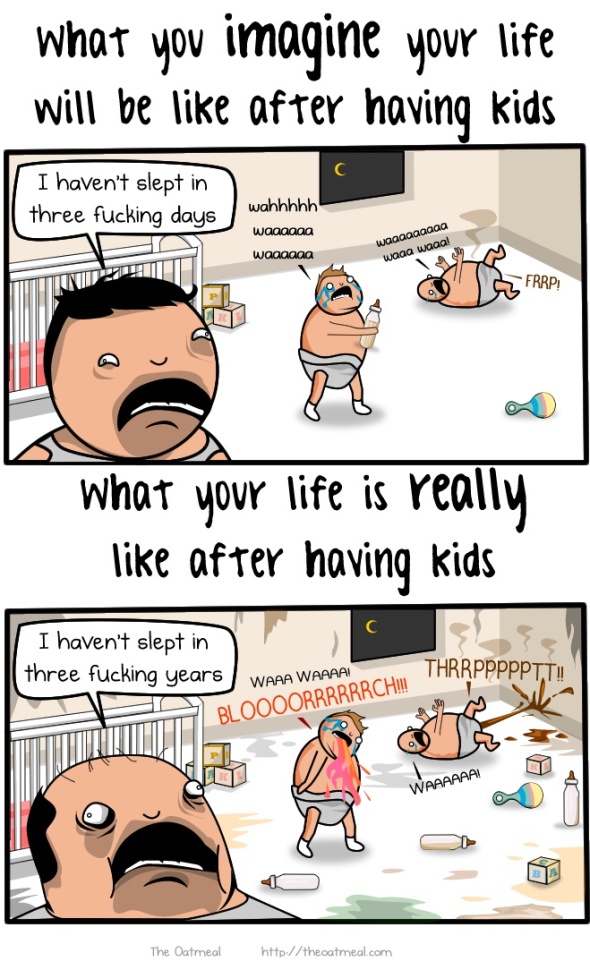 Credit for this all too true look at parenting goes to the one and only The Oatmeal, you can find more minor differences here.

Being a new parent can be stressful, new mothers can suffer from postpartum depression and even new fathers can find the changes stressful enough to cause depression. Unfortunately– and if that wasn’t bad enough– a new study shows that a father’s depression during the first years of parenting – as well as a mother’s – can put their toddler at risk of developing troubling behaviors such as hitting, lying, anxiety and sadness during a critical time of development.

This is one of the first studies to show that the impact of a father’s depression from postpartum to toddlerhood is the same as a mother’s. Previous studies have focused mostly on mothers with postpartum depression and found that their symptoms may impact their children’s behavior during early, formative years.

“New fathers should be screened and treated for postpartum depression, just as we do for mothers.”

Mothers and fathers who are depressed may not make as much eye contact or smile as much as parents who are not depressed. The more disengaged parents are from their child, the greater the risk the child will have forming close attachments and healthy emotions, Sheehan said.

“Depression affects the way people express emotions, and it can cause their behavior to change,” Sheehan said.

Previous studies have shown that fathers are at a greater risk of depression after the birth of a child than at any other time in a typical male’s life. This study found that a father’s mood during postpartum is important to the trajectory of his depression three years later and significant for predicting his child’s behavior during toddler years.

“Early intervention for both mothers and fathers is the key,” Sheehan said.

“If we can catch parents with depression earlier and treat them, then there won’t be a continuation of symptoms, and, maybe even as importantly, their child won’t be affected by a parent with depression.”

The researchers collected data from a cohort of nearly 200 couples with 3-year-olds. These couples had participated in a previous depression study around the time of their child’s birth.

Questionnaires administered to the participants gathered information about parental depression, their relationship with their partner, and their child’s internalizing behaviors (sadness, anxiety, jitteriness) and externalizing behaviors (acting out, hitting, lying). The questionnaires were completed by both members of the couple independently and mailed back to the investigators.

Some highlights from the study:

This entry was posted on March 12, 2015 by The Lunatic. It was filed under Health and Medicine, Psychology and was tagged with behavior, behavioral science, children, depression, neurology, parenting, peer reviewed, science.