Well here we are again, if you recall from our last post, we talked Bonferroni Correction. You may also recall that when the post concluded, there was no real topic for today. Well after some ruminating, before we jump into more statistics, we should talk about the central limit theorem. So let’s do a quick dive into what that is and why you should know it!*

The central limit theorem states (somewhat confusingly at least to me) that any set of variantes with a distribution having a finite mean and variance tends to be the normal distribution.

Let’s break that down if you don’t understand what that means exactly (don’t worry, it is confusing). What it means is that as our sample size gets larger, the sample means approach a normal distribution, no matter what the shape of the population distribution.

Let’s say we have 1000 cats (let’s assume an animal foster care situation and not crazy cat person situation) and we are interested in the average size of those cats. So we a measurement of each cat and find the mean of all 1000 cats, that would be the population mean. If we plot that data in a bar plot it may look something like this:

Back to our cat example!

Instead of looking at all the cats, say we measure 5 and take the mean of that subset. Next, say we repeat this process 100 times, that would be 500 cats, only half of our population, but what you would find is that if we plot that data in a bar plot we should find that it is normally distributed (OR, at least approaching normally distributed, because we have a finite set and remember the theorem says that as our collection of means gets larger, we will see our data become more normally distributed. In the end we would end up with something like this: 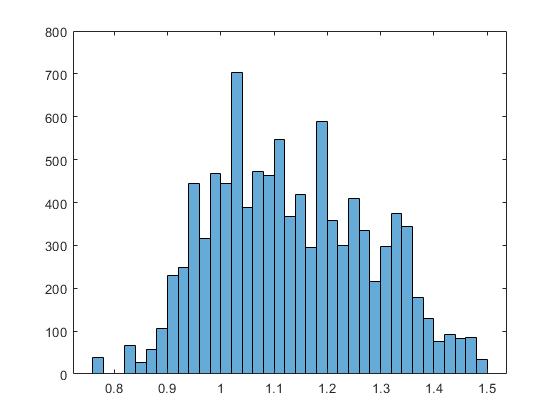 Distribution of the means of our subgroups

In this case, our data still doesn’t look perfect, but you can see that it is in fact fairly normally distributed. So let’s recap really quick in a list so we can make sure we get this:

*As usual, I make no claim to the accuracy of this information, some of it might be wrong. I’m learning, which is why I’m writing these posts and if you’re reading this then I am assuming you are trying to learn too. My plea to yu is this, if you see something that is not correct, or if you want to expand on something, do it. Let’s learn together!!

This entry was posted on September 7, 2019 by FullMetal. It was filed under 365 Days of Academia - Year one and was tagged with bonferroni, computer, Engineering, experiment, math, neuroscience, null hypothesis, probability, science, statistical errors, statistics.