It’s day twenty-three in our little series called know your spinal cord. For those just finding us, you can read the rest of the posts in our special neuroanatomy category created just for these posts! If I’ve counted correctly, this will be the seventh post on different spinal cord disorders and today we are covering something called Lichtheim’s disease, so let’s take a look.

Proper nutrition is important, we know this from a LOT of trial and error. Unfortunately, food deserts are a thing and due to no fault of their own, people can find themselves without the proper nutrition. We’ve all (probably) heard of scurvy, but thankfully have not had to deal with it. Well Lichtheim’s disease is a lot similar in that it is caused by a vitamin deficiency, which can have some very serious consequences.

Lichtheim’s disease or its more technical name, subacute combined degeneration of spinal cord is the degeneration of the posterior column and lateral columns of the spinal cord as a result of a deficiency in vitamin B12, vitamin E deficiency, or copper in the diet. Of these, vitamin B12 deficiency is the most common, which is why Lichtheim’s is often associated with anemia. This is a type of anemia caused by B12 deficiency and most commonly starts with the feeling of exhaustion, but can progressively get worse leading to tingling of the hands/feet, poor balance, depressed mood, and even confusion.

Like the anemia symptoms, Lichtheim’s disease (named after the person who found it) symptoms typically come on gradually and uniformly. It presents with weakness of the extremities and numbness, which gets worse as the disease progresses.  Vision changes and change of mental state may also be present. Bilateral spastic paresis, meaning an increase in muscle stiffness accompanied by muscle weakness may develop. Additionally, pressure, vibration and touch sense are diminished.

From a pathology standpoint, we see subacute combined degeneration consist of patchy losses of myelin in the dorsal and lateral columns. Myelin is the fatty exterior around nerves that helps increase conduction velocity. Below is a transverse slice of spinal cord showing the myelin lesions caused by  Lichtheim’s disease.

The outer pink and white spots (not the grey matter) are the myelin lesions made visible by staining the sample.

However, this is not the only way we can diagnose Lichtheim’s disease. We can also see the damage in an MRI scan (like the image at the top of our post). Below is another  MRI scan from a different person showing this (Green arrows). You’ll notice how it starts in the posterior column of the cord in both the slice above and the MRI below. Lichtheim’s disease affects white matter in a symmetric and nonselective fashion. This means that in advanced cases, the entire circumference of the spinal cord is affected. Thankfully, it is typically caught and treated before that occurs. 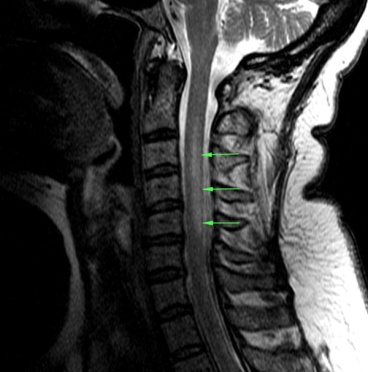 You’ll notice that the cord is a greyish hue in the MRI. However, at the green arrows there is a white patch. This is how the damage looks in an MRI scan.

There is good news and bad news, early detection is the key and if caught early, some of the symptoms can be reversed. Unfortunately, prolonged deficiency will lead to irreversible nervous system damage. Treatment is fairly straightforward, B12 intramuscular injections over the course of about a week will correct the deficiency, but determining the reason for the deficiency and correcting it is also important.

As we noted before, large amounts of nitrous oxide can cause advanced stages in a healthy person. That is because nitrous oxide oxidizes the cobalt ion of B12 thus interfering with its function as a coenzyme. In other words, recreational use of nitrous oxide can be very dangerous. The story above isn’t even the only case of this occurring, just one of the more recent and more severe cases.

Thus concludes our introduction to Lichtheim’s disease and our PSA (public service announcement) to avoid recreational nitrous oxide use. Tomorrow we will discuss tabes dorsalis, which comes with another fun PSA! No spoilers though, you’ll have to wait until tomorrow to find out what that is.

This entry was posted on February 15, 2020 by FullMetal. It was filed under 365 Days of Academia - Year one, Neuroanatomy and was tagged with biology, blog, daily routine, education, life, neurology, neuroscience, PhD, science, spinal cord.