Here we are at day forty-seven of spinal cord posts. We are definitely wrapping up our series sad to say, maybe we can get to day fifty, that would be a nice round number to stop at. For those of you who want to read all the other posts, the neuroanatomy category has everything in reverse chronological order and will teach you everything from the medullary pyramids, the cauda equina, and all the stuff in between. Today we are talking about glial scarring and why it’s such a problem a topic I realized we should touch on after talking about the problems with invasive spinal stimulation methods yesterday.

To give you an idea of why glial scarring is such a problem let’s talk about something more familiar. When you get a deep cut, chances are it will scar. You may have a few scars of your own, I have several. These scars are very distinct in that they are obviously different from the tissue surrounding it. While I am but a humble engineer, Beatrice the Biologist did a great job summing up how scars are formed. 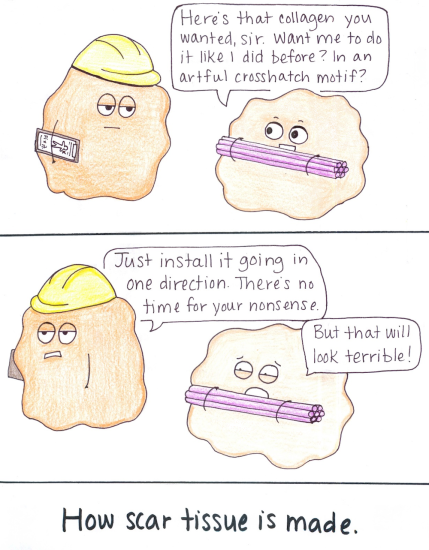 Comic by: Beatrice the Biologist, accept no substitutes.

Scar tissue is dense and makes it difficult for the tissues around it to grow through. Thus we have an issue. Skin isn’t the only thing that scars. Bones to brain, it all scars in its own way. Glial scarring is scar tissue formed by glial cells. We’ve touched on glial cells in prior posts, but since they are front and center today, let’s look at what they do then touch on why the fact they form scar tissue is such a problem.

Glial cells are non-neuron cells. They do not send the electrical signals that your neurons do, but they do important work for the neurons. They have four main functions:

Glia is greek for glue and glial cells were first discovered in 1856! As you can see from the list of functions, glial cells are diverse and are essential to the functioning of the neurons they surround. They are basically the life support system for the nervous system. In fact, they probably have more than the four basic functions we’ve listed, researchers have shown the number of glial cells in the brain is correlated with the intelligence of a species. While the name suggests glue, they do far more work than just providing scaffolding for the nervous tissue they surround. Below is a drawing of the types of glia, which gives you a better idea of their function. 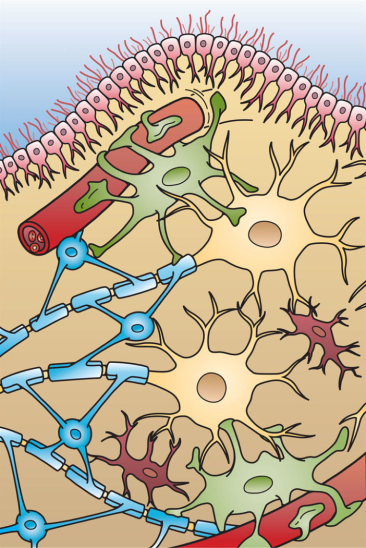 We could (and maybe will) do a whole post or even posts on glial cells. However, as a basic intro, that should get you up to speed. Now, let’s talk about glial scarring. A glial scar is the body’s mechanism to protect and begin the healing process in the nervous system. Unfortunately, it gets in the way of neuron regeneration. In the early 1990’s we discovered that part of the reason you don’t recover from a spinal cord injury is that the glial scar tissue prevents the nerves from growing out.

This isn’t to say there aren’t other hurdles to get around. However, this is important because even if we had a way to regrow spinal tissue with great success, accuracy, and no side effects it wouldn’t matter because the scar tissue would not let the nerve grow through it. As we mentioned yesterday, scar tissue forms very easily in the brain and spinal cord so care needs to be taken to avoid creating it when there isn’t scar tissue and to avoid making it worse when there is scar tissue. Below is a diagram showing the formation of a glial scar.

Glial scarring happens due to the reactions of several of the types of glial cells, but the biggest contributor is the astrocyte (as seen here).

The technical term for glial scarring is reactive astrogliosis, which as the name suggests is an abnormal increase in the number of astrocytes. Thankfully researchers are finding ways to soften the glial scar, which can help the nervous tissue regenerate in the area. In 2002, researchers found that by using a special enzyme (chondroitinase ABC), the tissue could be softened enough for tissue regrowth, but this was in rats and hasn’t been done in humans…yet.

This isn’t to say that glial scarring isn’t important, it has several very necessary functions. Moreover, in 2016 researchers found that without astrocytes, which are significantly involved in the formation of the scar, the axonal re-sprouting is much more difficult. So over all the glial scar can be a mixed outcome or maybe a necessary barrier to finding a way to recovery.

I haven’t been feeling well lately, lack of sleep you see. So tomorrow we may go over glial cells in more detail. It may help give us a more complete picture of the situation, of course it’s all very complicated so maybe we will attempt an overview of the cell types one at a time. I’m not sure yet, but I’ll figure it out. In the meantime I hope this was a clear introduction to glial scarring and why glial scars are both a bad thing and a good thing.

This entry was posted on March 11, 2020 by FullMetal. It was filed under 365 Days of Academia, Neuroanatomy and was tagged with biology, blog, daily routine, education, life, neurology, neuroscience, PhD, science, spinal cord.