Fear, PTSD, and newly found neural circuits in the brain

People with anxiety disorders, such as post traumatic stress disorder (PTSD), often experience prolonged and exaggerated fearfulness. Now, an animal study suggests that this might involve disruption of a gradual shifting of brain circuitry for retrieving fear memories. Researchers have discovered in rats that an old fear memory is recalled by a separate brain pathway from the one originally used to recall it when it was fresh.

END_OF_DOCUMENT_TOKEN_TO_BE_REPLACED

Mind control, we’ve seen several semi [see very] invasive ways to make it happen here from the Labs. Now those crazy scientists from MIT  have developed a technique that allows researchers to enable neurons to be silenced noninvasively, using a light source outside the skull. All using a protein known as Jaws.

Optogenetics [a technology that allows scientists to control brain activity by shining light on neurons] uses light-sensitive proteins that can suppress or stimulate electrical signals within cells. This technique is very invasive though because it requires a light source to be implanted in the brain, where it can reach the cells to be controlled.

END_OF_DOCUMENT_TOKEN_TO_BE_REPLACED

Eternal Sunshine of the Spotless Mind?

A frame from Eternal Sunshine of the Spotless Mind. What if it was more than just a movie…

Much like this posts namesake, the movie Eternal Sunshine of the Spotless Mind asked what if you could erase memories? Want to forget your ex, no problem. Better yet, what PTSD? I’m sure that all of us can think of at least one or two things — be it embarrassing, or scary — that we would like to forget.

Or conversely, maybe there is something forgotten, something you would give anything to remember — like a loved one or a relative — locked away deep in your brain. Thanks to new advancements in neuroscience, it’s technology that is not just in the movies anymore.

END_OF_DOCUMENT_TOKEN_TO_BE_REPLACED

What if you were trying to learn language, but you could only see one letter at a time. Nothing before that letter, nothing after that letter, just a single letter. You can imagine how frustrating something like that might be, that is exactly what scientists have been dealing with when it comes to the brain. But a new innovation is changing that and with it, opening a whole new realm of possibilities.

END_OF_DOCUMENT_TOKEN_TO_BE_REPLACED 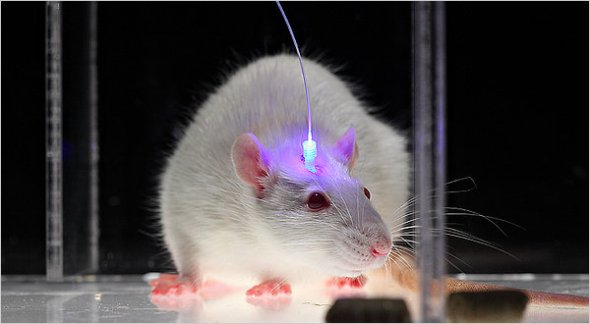 Searching for a new way to cure paralysis, a team of scientist has come up with a remarkable and off the wall idea. This discovery comes out of the labs at the University College London. The team, lead by Linda Greensmith, used stem cells and optogenetics to control leg muscles in mice and completely circumvent the nervous system in the process.

For those of you who are not familiar with Optogenetics [and really, why would you be familiar with it?] here is a overly simple rundown of what we are talking about.