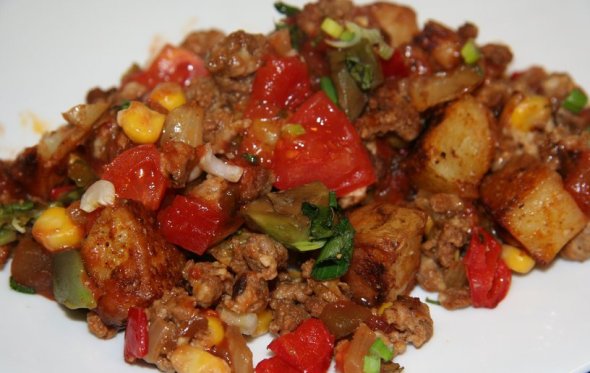 Like spicy food? Well next time you eat some you should hug that chili pepper, because he might just save your life. This is an interesting find, researchers have found that dietary capsaicin — the stuff that gives chili pepers that spicy burn — produces chronic activation of a receptor on cells lining the intestines of mice, which just happens to trigger a reaction that ultimately reduces the risk of colorectal tumors [a fancy way of saying tumors in the intestinal tract].

The receptor [or ion channel] called TRPV1, was originally discovered in sensory type neurons, it acts as a detector for heat, acidity and spicy chemicals in the environment.

“These are all potentially harmful stimuli to cells,” said Eyal Raz, MD, professor of Medicine and senior author of the study. “Thus, TRPV1 was quickly described as a molecular ‘pain receptor.’ This can be considered to be its conventional function, which all takes place in the nervous system.”

But now researchers have found that TPRV1 is also expressed by epithelial cells of the intestines. It may seem like an odd place to find it, but here it is activated by epidermal growth factor receptor [or since we like shortening things EGFR]. As it happens, EGFR is an important driver of cell proliferation in the intestines, whose epithelial lining [or outer lining of the intestines] is replaced approximately every four to six days.

“A basic level of EGFR activity is required to maintain the normal cell turnover in the gut,” said Petrus de Jong, MD, first author of the study. “However, if EGFR signaling is left unrestrained, the risk of sporadic tumor development increases.”

You can probably see where this is going already. Nevertheless, the scientists discovered that TRPV1, once activated by the EGFR, initiates a direct negative feedback on the EGFR, this had a dampening effect on the latter to reduce the risk of unwanted growth and intestinal tumor development. They also found that mice genetically modified to be TRPV1-deficient suffered higher-than-normal rates of intestinal tumor growths.

“These results showed us that epithelial TRPV1 normally works as a tumor suppressor in the intestines,” said de Jong. In addition, molecular studies of human colorectal cancer samples recently uncovered multiple mutations in the TRPV1 gene, though Raz noted that currently there is no direct evidence that TRPV1 deficiency is a risk factor for colorectal cancer in humans.

“A direct association between TRPV1 function and human colorectal cancer should be addressed in future clinical studies,” he said.

However, if such proves to be the case, the current study suggests one potential remedy might be spicy capsaicin. This is because it acts as an irritant in mammals, generating that familiar burning sensation when it comes in contact with tissue. In fact, capsaicin is already broadly used as an analgesic in topical ointments, where its properties as an irritant overwhelm nerves, rendering them unable to report pain for extended periods of time. It’s also happens to be the active ingredient in pepper spray [ouchies].

Using the connection they found, the researchers fed capsaicin to mice genetically prone to developing multiple tumors in the gastrointestinal tract. The treatment resulted in a reduced tumor burden and extended the lifespans of the mice by more than 30 percent. Even better, the treatment was even more effective when combined with celecoxib, which is a COX-2 non-steroidal anti-inflammatory drug already approved for treating some forms of arthritis and pain.

“Our data suggest that individuals at high risk of developing recurrent intestinal tumors may benefit from chronic TRPV1 activation,” said Raz. “We have provided proof-of-principle.”

Although more work needs to be done, this could be great news for those at risk for developing intestinal cancers. Honestly I have a vested interest in this since my wife is at risk for multiple different cancers, as it happens intestinal cancer just happens to be on that list. Looks like I’m making salsa tonight…

Want the full study? Great, you can find that —here!

This entry was posted on August 2, 2014 by The Lunatic. It was filed under Health and Medicine and was tagged with cancer, health, medicine, peer reviewed, science.