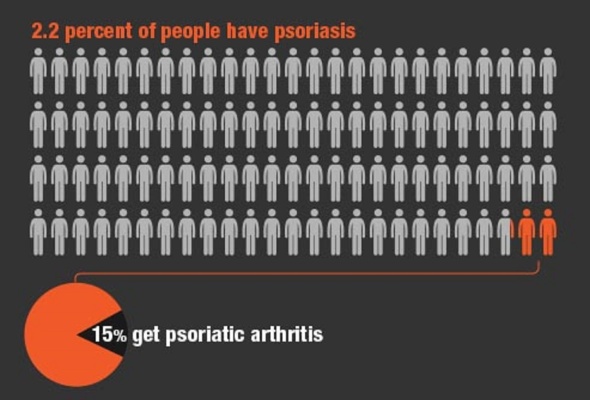 Sure it’s not sexy, you probably won’t be asked for donations towards a cure, or to run/walk/dive for awareness, and it probably won’t kill you. Psoriasis is an autoimmune disease, but chances are you are not familiar with it. It causes red, scale-like patches, sometimes covering a majority of the body. It’s itchy, painful, and embarrassing (to put it nicely). I know first hand as I suffer from it albeit mildly. I say mildly since I am lucky the patches are fairly small, but not so lucky for me they pop up on my face, often. However, new research is offering hope for anyone suffering from psoriasis and possibly a cure.

In a recent study, researchers found that many patients suffering from psoriasis showed significant recovery after just a single dose of an experimental treatment with a human antibody that blocks an immune signaling protein crucial to the disease. By the end of the trial,  nearly all of the 31 patients to receive treatment saw dramatic, if not complete, improvement in their symptoms.

“The striking result we achieved using a human antibody that targets the signal interleukin-23 suggests we are on the threshold of doing something very different from our current model of treating psoriasis with immunosuppressive drugs throughout an adult lifetime,” says study author James Krueger.

“It raises the possibility of working toward long-term remission — in other words, a cure.”

Psoriasis can be quite the debilitating disease and for most people not only can it be painful and uncomfortable it can also be a cause for isolation. In 2004, the team suggested a dominant role for interleukin-23 in the disease, and since then research has supported this hypothesis. It appears that interleukin-23, a type of immune signaling molecule known as a cytokine, kicks off a cascade of interactions that leads to inflammation in the skin and excessive growth of skin cells and dilation of blood vessels.

The discovery of interleukin-23’s role has led to tests of a number of new antibody-based therapies that target it, but the compound, known as BI 655066, stands out. BI 655066 is a human antibody that targets interleukin-23 and blocks it from binding to the receptors on cells that respond to it.

Only a single treatment produced what the team describes as “rapid, substantial, and durable clinical improvement in patients with moderate-to-severe psoriasis.”

On average, patients who received the treatment had a more than 80 percent improvement in the severity and extent of their skin lesions that continued until tracking ended six weeks after treatment. Meanwhile, genetic sequencing from skin samples revealed that the antibody’s action reduced the expression of many of the cytokines and other molecules that define psoriasis.

What does this mean for myself and other psoriasis sufferers? Well, right now not much. However, this could be a cure for the problem and at the very least a promising new treatment given the lack of options (corticosteroid creams and possibly immunosuppressants).

This entry was posted on March 14, 2015 by The Lunatic. It was filed under Biology, Health and Medicine and was tagged with antibody, antibody therapy, autoimmune, autoimmune disease, health, medicine, peer reviewed, psoriasis, science.