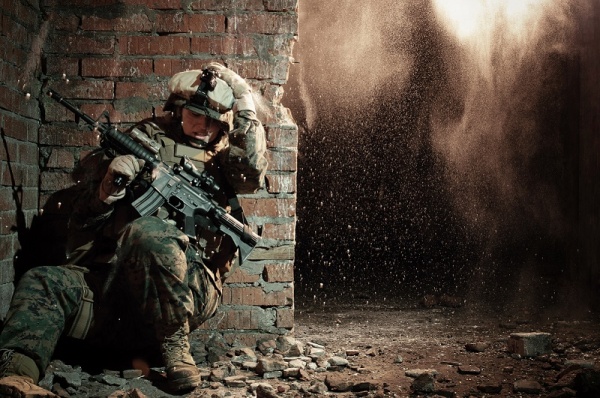 No one knows Traumatic brain injuries (TBI) quite like veterans. Unfortunately, it is a major cause of mortality and morbidity, often causing lifelong disability for those who survive. There is simply no treatment, jut care, but a new study might change that. Stem cell therapy has recently been receiving attention as a way to promote recovery for injuries to the central nervous system (CNS) which opens the door for treatment of a TBI.

The researchers found that the transplanted hNSCs had a beneficial effect when the cells differentiated into a neuroprotective form (M2) of microglia (the main immune cells of the CNS) and subsequently reduced inflammatory responses generated by the injury.

“Two types of stem cells have been tested in animal models of neurotrauma: mesenchymal stems cells (MSCs) and neural stem cells,” explained Dr. Ping Wu of the Department of Neuroscience and Cell Biology at the University of Texas Medical Branch at Galveston.

“The attractive feature of hNSCs is their unique nature of being committed to differentiation into neural cell lineages.”

“We hypothesized that hNSC transplantation may provide several layers of benefits as a protective therapeutic strategy for brain injury by positively affecting the post-injury microenvironment and replacing lost neural cells.”

The researchers reported that the animals receiving the hNSC transplantation showed “significantly reduced accumulation of amyloid precursor protein (APP),” an indicator of axonal injury. Most importantly, the researchers observed an increase in anti-inflammatory proteins of microglial cells of the protective M2 subtype.

“Our study confirmed the beneficial effect of hNSC transplantation for TBI and suggested that hNSCs have the ability to lessen the damage to neural cells, leading them to differentiate from the damaging M1 subtype into the neuroprotective M2 subtype,” explained Wu.

“The transition to M2 likely contributes to the neural repair effect of the grafted hNSCs.”

The shift from M1 to M2 types is important because M1 cells and their associated cells are known to be toxic; the M2 cells on the other hand promote a regenerative response in the injured CNS.

“In future studies, it will be interesting to determine how cells in brain regions distant from the damage center respond to traumatic injury and cell grafting.”

“Traumatic brain injury is a major area of concern for both clinicians and researchers and can result in devastating, debilitating effects for the patients,” said Dr. Paul R. Sanberg, Co-Editor-in-Chief for Cell Transplantation.

“TBI affects many different groups within our society and, as such, new approaches are sorely needed. This study offers new, mechanistic insight into the efficacy of neural stem cell transplantation and the field of regenerative medicine as a whole. Future studies that help progress this treatment modality to the clinic are warranted.”

This entry was posted on April 19, 2016 by FullMetal. It was filed under Health and Medicine, Neuroscience Research and was tagged with cell biology, health, medicine, Mental Health Stuff, neurobiology, neurology, peer reviewed, TBI, traumatic brain injury.