Some EEG data that I’ve aligned, processed, and made look nice and pretty.

Signal processing, it’s complex, there are a million ways to go about processing a signal, and like life, there is no best way to go about doing it. Trust me, it is as frustrating as it sounds. Today’s scratch pad note is on power spectral density or PSD for short. So let’s dive in.*

So you’ve collected some data, good! Well one of the first things we can do with that data is look at the power spectral density. For this post (and most future posts I’m sure) I will be using MATLAB, but with some work you can translate it to just about any other programing language. Like I mentioned earlier, there are a bunch of ways we can do this, but the two we will be talking about today are Welch’s power spectral density estimate (MATLAB command is pwelch) and Thomson’s multitaper method (MATLAB command is pmtm). Both methods rely on the same basic principle, the Fourier transform.

The magic of the Fourier transform is that we go from working in the time domain to the frequency domain where a whole lot of difficult calculations become much simpler to solve. This is done by approximating the signals using sine and cosine. This transformation means we can look at what frequencies make up the signal (among a lot of other useful stuff) and while it is just an approximation, we can get really close, as in close enough to be a valuable tool when doing signal analysis. 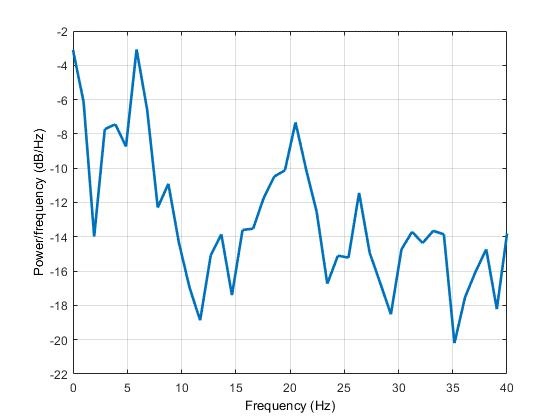 Example of the pwelch output (the data was noisy, as you can tell by how jagged it is.

There are quite a few inputs, some easier to figure out than others, in this example:

You can also specify a bunch of other things, such as confidence interval, range, nfft (which I will cover at a later time), and a few other things.

So not a deep dive, but still a fairly long intro into pwelch. We did not cover how this differs from pmtm, the window shape (because yes you can shape the window and this has important ramifications for your output), we haven’t talked spectral leakage (no one likes leakage), and we haven’t covered a bunch of other stuff. On the other hand, we have 364 days left so I think it will get covered soon(ish).

It’s day one of 365 days of academia. So far so good, look at me sticking to goals! I doubt they will all be this long, but hey a strong start.

This entry was posted on August 20, 2019 by FullMetal. It was filed under 365 Days of Academia - Year one and was tagged with 365DoA, biomedical engineering, blog, education, EEG, Fourier, goal setting, neuroscience, PSD, signal processing.