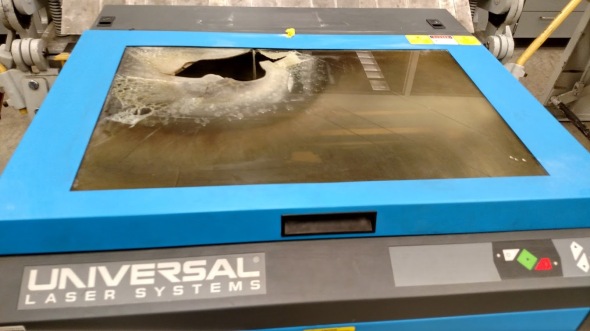 Not everything can be safely laser cut…

It has been a busy week, as you’ve seen I’ve had not one, but two Skype a scientist sessions in one day, then we did some outreach with some local 4th graders, yesterday I even posted photos of the event. Yesterday I also had a conference call to help set up an event that I’m helping run for neurotech entrepreneurs. If you follow me on twitter, you know I’ve pushed people to apply for it. So let’s talk about what I’ve got going on today!

Yep, it’s fair to say that I’ve been busy and today is no exception! Today I have yet another Skype a scientist session (my fourth of six for the school term). I’m excited because this is an older class (11th grade, so one year before they are possibly off to college).

Obviously I show off some of the work I’ve done and the journey that I’ve taken to get here. Today I wanted to touch on a topic I’m very familiar with and that’s failure. See, sometimes we learn the most when we fail. It’s not fun, but it is a hard truth that can sometimes help you see the brightside to no succeeding in something particularly difficult. Let’s start with a story.

Once upon a younger undergraduate day, I had a hard time adjusting to being a civilian. Long story short, I had some mental health issues creep up (which you can read about here) and my grades fell, hard. I stopped trying in school and like an idiot I kept going anyway even though I was flailing worse than a fish out of water. When I got myself together enough to look forward through the storm that I called my life, I realized that I was in trouble, I needed to apply to the upper level courses for my engineering program (a separate “sub school” within the larger university). It was competitive and I would not make it.

In fact, I was told as much by the undergraduate advisor. She told me to find a different degree, that I wouldn’t get into the program, I wouldn’t make it, and that there was no point to even apply. This is a story of failure, and I had to readjust what my expectations of my future were.

Except I didn’t do that. I had spent the past year failing courses, but my grades had drastically improved the term prior to my application. Even with all my failures, I had learned to keep going. Maybe I’m stubborn, or headstrong, or whatever adjective you want to use, but I spoke with the head of the program. I explained my situation, what I had been through, why my grades had dropped so low. He sat, listened, and said he would give me one chance, I couldn’t fail any of my classes for the first year. I was conditionally accepted into the program.

That was almost 4 years ago and since then I graduated with my BSME, MSME, and I was accepted into my current PhD program. I’ve been very lucky and while I’ve (so far) succeeded, I still struggle on a lot of fronts.

Math doesn’t come easy to me and when I do grasp something it is usually well after my peers. Unfortunately my first attempt at my qualifying exam didn’t go so well. It was a good reality check and made me reevaluate how I do things now. It’s actually why I’m typing this right now, it was what’s pushed me to be here writing my journey down again.

Sometimes we learn (painfully) our limitations and if we are lucky, we also learn to nurture those limitations, work around them, and grow. At the top of this post, I’ve included a photo of my old universities laser cutter, here is a shot of the inside.

One of the students using it learned a very important lesson that day (no, that isn’t a way of saying that it was me, thankfully it was not a lesson I had to learn). While it was embarrassing, the school understood that it was an accident, he learned from it, and wasn’t punished for it in any way. He wasn’t the first to break an expensive piece of equipment and he won’t be the last. Failure can sometimes mean you’re just trying something difficult. It’s uncomfortable and not a fun feeling for sure, but sometimes we learn best when we fail and that has to be okay too.

I try to tailor what I talk about based on the age of the class I am working with. Today that is the message I want to share with my class, that failure is okay as long as you learn from it and keep trying. Things won’t always work out the way you expect, but I’ve learned a lot from my failures and I don’t expect that I will stop failing anytime soon. After all, I’m getting pretty good at failure and it makes successes that much better.

This entry was posted on October 24, 2019 by The Lunatic. It was filed under 365 Days of Academia - Year one and was tagged with children, Education, Engineering, learning, Mental health, outreach, PhD, school, SciComm, science, STEM, story, teaching.