Know your spinal cord – The H-reflex

We measure the H-reflex by applying an electrical stimulus (S) behind the knee, the ground (G) gets placed around the soleus and the recording electrode (R) is placed inline below, this is the route the nerve takes.

Yesterday we had a bit of a break so I could share a critical review paper. That means this is day twenty-five of the know your spinal cord series! We’ve also hit the halfway mark in our 365 days of academia challenge! If you’re new here, you can find all of the fun spinal cord knowledge we’ve amassed by checking out our neuroanatomy category! We are going to take a step away from spinal cord disorders to talk about something we kind of covered, but deserves a more in-depth exploration. This is all you wanted to know about the H-reflex, so let’s dive in.

Yesterday I did a review on a paper that looked at the stretch reflex and the H-reflex of the soleus (a muscle in the calf). We’ve already covered spinal reflexes, but it focused mostly on stretch reflexes. The H-reflex is a sort of man-made reflex response, we elicit it by using electrical stimulation of sensory nerves (type 1a afferents) behind the knee. Confusingly, there are two Hoffmann’s reflexes and not only are they different reflexes, it isn’t even the same Hoffmann!

The H-reflex or Hoffmann’s reflex (again named after the guy who found it Paul Hoffmann in 1910) is one way we can probe spinal cord circuitry. It is similar to the mechanically induced stretch reflex (like knee jerk). The main difference between this reflex and the stretch reflex is that we are bypassing the muscle spindles so we are stimulating the neuron directly. This is important because it gives us quantitative information, such as latencies and amplitudes of the response and we can collect this information very reliably across subjects.  Below we can see what the H-reflex pathway and response looks like. You’ll notice a small bump after stimulation artifact (labeled), this is called the M-response (muscle response)  and for the most part we ignore this.

H-reflex pathway and the measured response

Like when we stimulate the spinal cord, there is a limit to the H-reflex response. As we increase the intensity of the stimulation we saturate the nerve fibers and we will see a reduction in the H-reflex but an increase in the M-response. This marks the shift in measuring alpha motoneuron excitability to stimulating the motor neuron pool directly, which is not particularly useful in our case. We can use this information to create what is called a recruitment curve, which shows us where we are from the maximum response. Below is an example recruitment curve, each point is a maximum-minimum measurement of the H-reflex. You can also see that as you increase intensity, the M-response continues to grow while the H-reflex becomes suppressed. 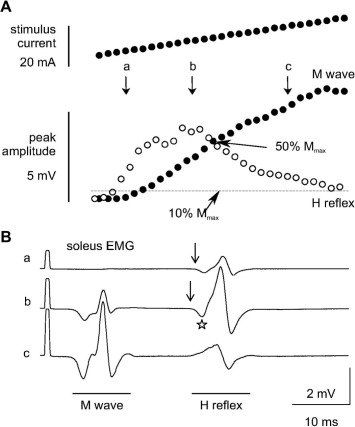 You can see the H-reflex recruitment curve based on increasing stimulus intensity (white dots) and the M-response (black dots) in figure A (top). In figure B (bottom) you can see different stimulus amplitudes being applied and the response as they increase from small to large (a, b, c).

When we talk about the H-reflex we consider it a monosynaptic reflex, a single neuron for the afferent path and a single neuron for the efferent path. However, that is an oversimplification of what we are measuring. The H-reflex pathway synapses on the grey matter of the spinal cord (as seen in the H-reflex pathway image) , so in reality it activates pools of neurons before the response is produced. This makes it incredibly valuable at understanding the spinal circuitry without being able to actually measure directly from the spinal cord itself.

Furthermore, the H-reflex is very dynamic and can be easily altered. For example, if we apply pressure to the muscle, we will record a decrease in H-reflex amplitude which is roughly proportional to the the pressure applied. This effect resolves immediately after you release the pressure, unless high pressure is applied, then it can cause depression for several second after release.

The H-reflex has even been tested… IN SPACE!!! It was actually the first medical experiment performed on the international space station. They found after about a week in low gravity the h-reflex diminishes significantly. This is assumed to be caused by a decrease in spinal cord excitability, but the big question is why? Once the astronauts return to earth, the H-reflex returns to normal after about a week.

In summation, it takes approximately a week for the spinal cord response to change when in a low gravity state or after a return to normal gravity. This bit of information actually tells us something important about how the spinal cord adapts and how quickly that can happen.

That pretty much wraps up the H-reflex, something super important that we kinda forgot to cover. Oops… in any case, next up we will be talking about motor neuron disease. Technically this is a family of diseases, but there is a lot of overlap so we’ll get into what all that means tomorrow.

This entry was posted on February 18, 2020 by The Lunatic. It was filed under 365 Days of Academia - Year one, Neuroanatomy and was tagged with biology, blog, daily routine, Education, life, neurology, neuroscience, PhD, science, spinal cord.