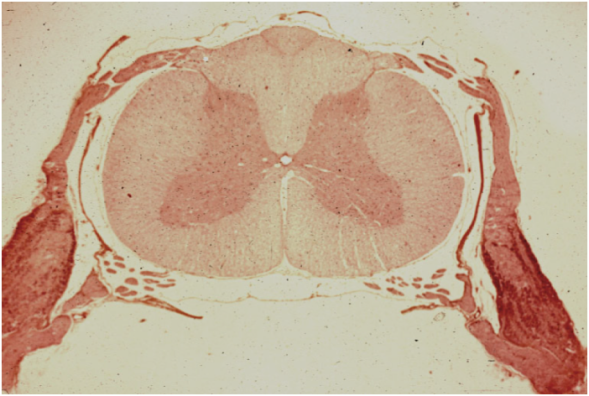 Here we are at day thirty one of knowing your spinal cord and we’re still going strong. I’m very happy that I cataloged all of these posts in the super handy neuroanatomy category, which should make it easy for you to find each and every one of them! Today we’re talking about something we’ve touched on in the past, but deserves its own post, the spinal nerves. We need to cover this for the next couple of posts, where things get a little… odd. So let’s get started!

We’ve already introduced the spinal nerves once before. However, there is a lot to cover talk more about the role of the spinal nerves (also referred to as roots). We have two different pairs on each side of the cord, a dorsal (rear) root and an ventral (front) root. For those of you who are more computer savvy, if you were a computer, your brain would be the CPU, everything gets processed here and it is the thing in charge. We could also think of your spine as the GPU, it does processing independently of the CPU, it still passes things on to the big boss CPU, but it also handles other things on its own. In this metaphor the spinal roots are the cables plugging into the GPU. Like with any metaphor, if we go into more detail it falls apart, but this works for now.

We have a total of thirty-one pairs of spinal nerves running the full length of the spinal cord. Additionally, there is an afferent set of nerves and an efferent set. The afferent signals are run through the dorsal roots, while efferent information is run through the ventral set. For the purposes of this post, we will focus primarily on the afferent set in the area closest to the spinal cord up to the dorsal root ganglion in particular. Next post we will look at the stuff after the dorsal root ganglion, but that deserves its own post. 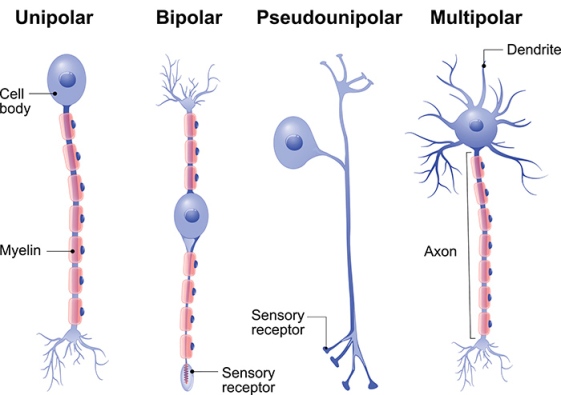 Different kinds of neurons. structure of a typical neuron 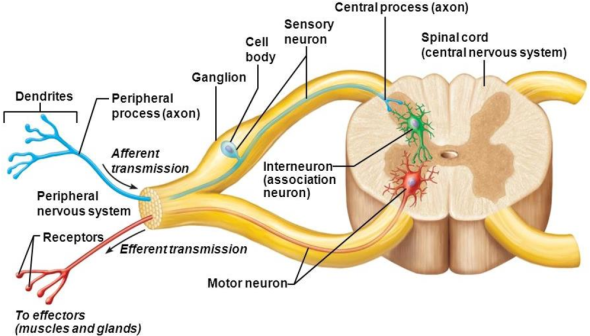 You’ll also notice in the image above that the dorsal root and ventral root join together, well there is some (a lot) of simplification involved. They break off into something called the dorsal and ventral ramus, which is why we will need another post to cover it all.

In any case, the nerve endings that feed into the dorsal root ganglion have a variety of sensory receptors that are activated by mechanical, thermal, chemical, and noxious stimuli. We can actually lower the threshold needed cause these nerves to fire by applying compression to the dorsal root ganglion using a mechanical stimulus, thus creating an action potential. This firing may even persist after the removal of the stimulus.

That actually tells us a little bit about what makes up the root ganglion. We know there are two distinct types of mechanosensitive ion channels located here. They are classified as high-threshold and low threshold based on how sensitive to pressure they are (high-threshold requiring a higher amount of mechanical stimulus than the low-threshold). The presence of these channels in the dorsal root ganglion gives reason to believe that other sensory neurons may contain them as well.

Now that we’ve introduced the nerve roots to this point, tomorrow we can talk about the dorsal and ventral ramus as well as some oddities surround the structures. Unfortunately, while we can introduce them, to go into detail would require several more posts (as with anything we’ve covered really) so we’ll try to give you the introduction at least.

This entry was posted on February 23, 2020 by The Lunatic. It was filed under 365 Days of Academia - Year one, Neuroanatomy and was tagged with biology, blog, daily routine, Education, life, neurology, neuroscience, PhD, science, spinal cord.