Welcome to day thirty-eight in the know your spinal cord series. As always, you can find the entire know your spinal cord series exclusively listed under our neuroanatomy category. We’ve amassed quite a bit of spinal information and I’ve gotten into more detail than I originally planned, which is part of the reason why we are going back and covering some of the things we skipped over. Today is one of those topics, we will be talking about the spinotectal tract, not to be confused with the tectospinal tract, which we already covered.

As mentioned yesterday, the tectospinal tract is one of three major pathways that make up the anterolateral system. The other two are the spinothalamic tract and the spinoreticular tract. The anterolateral system is the group of tracts responsible for our perception of pain and start at the nociceptors in the skin.

We’ve covered this before, but as a refresher, nociceptors are cutaneous receptors that detect noxious stimuli (a fancy term for painful stimuli), such as very hot or cold temperatures, extreme pressures, or tissue damage. There are four main types of skin nociceptors that are specialized to detect these types of stimuli. However, while there are different types of nociceptors, one defining feature is their tendency to be sensitized by prolonged stimulation, making them respond to other sensations as well.

This is where the spinotectal tract (also called the spinomesencephalic tract) comes in. It plays an important role in the control and inhibition of pain. It originates in the spinothalamic tract and terminates in the inferior and superior colliculi in the brain stem (shown below).

This fibers in this tract follow the same pathway as the spinothalamic tract, just like the spinoreticular tract, and just like the spinoreticular tract it makes its own detour. The fibers in the spinotectal tract synapse in a part of the brain called the periaqueductal gray. When these neurons are activated they can activate a pain suppression system found in the body that releases something called endogenous opioids (such as endorphin, enkephalin, dynorphin). These substances are produced by the body and have effects similar those of opiate drugs, reduced pain, enhanced mood, etc. Below is an image showing the location of the periaqueductal gray.

For completeness sake, we can show the full route the spinotectal tract takes in the body. Below is an image showing all three tracts of the anterolateral system and how they differ. Notice that the spinotectal (red) and spinoreticular (green) tracts end in the brainstem in this image, that isn’t actually the case, but this is typically how they are shown, just know they continue onto the somatosensory cortex as well, but are sometimes considered to end at the location unique to their tract, especially when shown in a group like this. 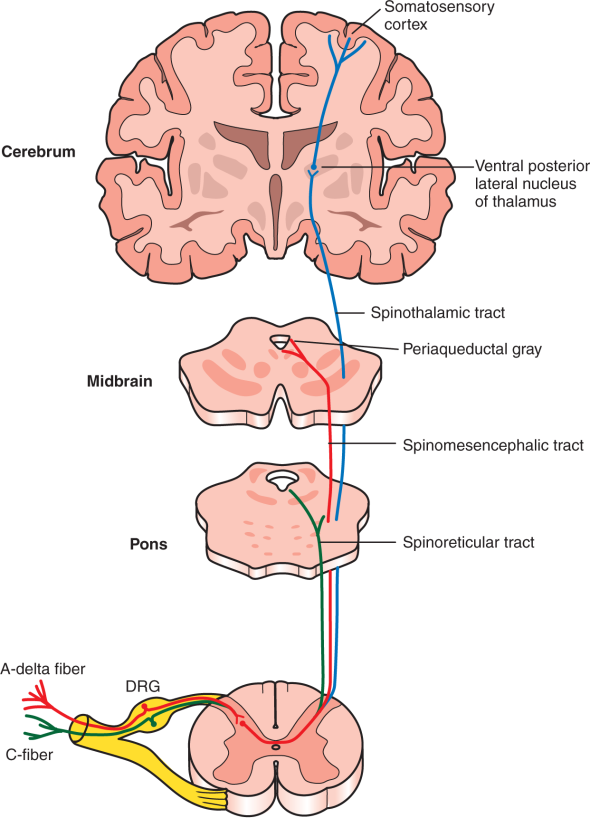 That wraps up our bit on the spinotectal tract and that covers the anterolateral system! Next time you step on a lego, you can think of this system and all the parts that go into making sure you know you stepped on it. Remember, while pain hurts, it’s the way our body tells us that something is wrong. While the pain system can go haywire, it is still important, even though it can be a huge… pain.

This entry was posted on March 1, 2020 by The Lunatic. It was filed under 365 Days of Academia - Year one, Neuroanatomy and was tagged with biology, blog, daily routine, Education, life, neurology, neuroscience, PhD, science, spinal cord.