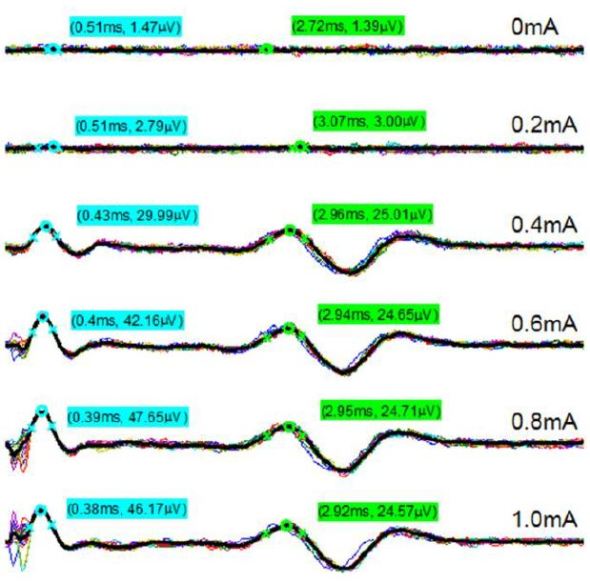 Example processed nerve responses during stimulation trials. The individual CNAP responses for each stimulus (thin traces) were averaged (thick trace, n=20 stimuli). All traces are shown from time 0 to 6ms. The top trace corresponds to an amplitude of 0, the bottom 1mA, and the traces in between are arranged in increments of 0.2mA. Peak latencies and heights (o’s) and widths at half peak height (x’s) were extracted from the averaged signal. The peaks labeled for the 0mA trial are due to noise and baseline activity. These peaks are not actual response peaks from the nerve and are ignored.

Another two weeks, another critical review and as always since my PI gets a copy, so do you. Technically this should’ve come yesterday, but I really wanted to follow up with the Roosevelt mess going on. In any case today we are looking at something not quite spinal cord stimulation, but has applications in the spinal cord stimulation field. Let’s take a look!

Electrical nerve stimulation is used for several different neuromodulation applications. From understanding how the nerves function to providing relief to people suffering from seizures, depression, or chronic pain, nerve stimulation offers a novel way to treat illness without the use of medication. This study looks at burst modulated waveforms and which nerve types are being activated. Importantly, this information not only applies to nerve stimulation, but in spinal cord stimulation as well. By better understanding the way waveforms activate different nerve types, we can better adjust treatment to maximize the efficacy.

This study was done using female Long-Evans rats. While it is not explicitly stated by the authors it appears there were six separate rats used in this experiment. Each rat had a cuff electrode surgically placed around the left cervical vagus nerve. Once recovered, each of the rats underwent a minimum of thirty trials where one trial consisted of 1 second train of 20 pulses or 20 pulson-bursts. The authors define a pulson-burst as a 1 second charge-balanced pulse with a carrier frequency that separates it into shorter pulse widths and duty cycle. They divided the pulse into 2, 5, or 10 smaller pulses with a duty cycle ranging from 20% to 80% and an overall pulse burst width of 1 second.

Analysis of the results was done using an ANOVA and Tukey’s range test. They found that waveforms with short duration of charge injection (shorter pulse width) were statistically more charge efficient, requiring less charge to reach 50% fiber activation. They also found that the shorter duration of charge injection was more A-fiber selective.  This confirms other studies that have shown that short pulse width stimuli yield lower thresholds for fibers with larger diameters. Lastly, they found that the 40μs pulse and the 2-pulse pulson with 20μs pulse width and 80μs inter-pulson interval waveforms decreases charge efficiency and decreases A fiber selectivity (thereby increasing C fiber selectivity).

Overall this is an interesting study because they look at the waveform used for stimulation and its effect on the nerve fibers. Pulse modulation characteristics are only just starting to be explored for use in transcutaneous spinal cord stimulation. Better understanding of how nerve fibers react to changes in the pulse properties could be vital in providing tailored treatment to people with spinal cord injury. There are several problems with the paper itself. For example, they don’t define some of the acronyms they use, they don’t discuss limitations of the study itself, and most importantly they don’t explicitly state the number of subjects in the study, just to name a few issues. However, the information from the experiment should prove useful in neuromodulation applications as a whole.

This entry was posted on April 14, 2020 by FullMetal. It was filed under 365 Days of Academia, Critical Reviews and was tagged with education, learning, neurology, neuroscience, PhD, review, routine, writing.