Smart cells teach neurons damaged by Parkinson’s to heal themselves 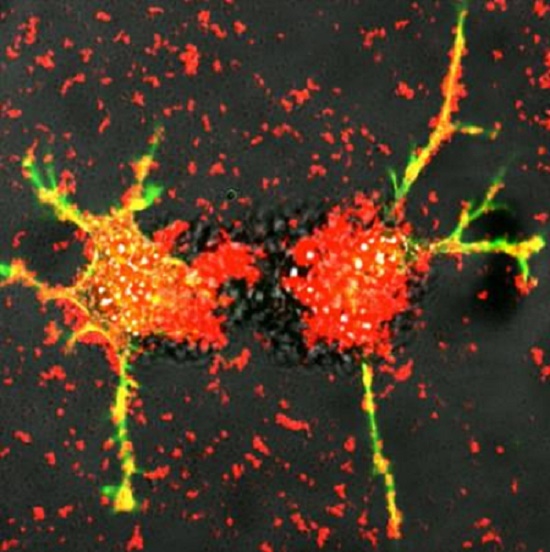 These are white blood cells reengineered by scientists at UNC-Chapel Hill deliver exosomes (red) loaded proteins that stimulate the growth of damaged nerve fibers (green and yellow). Researchers at the UNC Eshelman School of Pharmacy this technique can be developing into a potential treatment for Parkinson’s disease.
Image credit goes to: Elena Batrakova/UNC Eshelman School Of Pharmacy

As a potential treatment for Parkinson’s disease, scientists at the University of North Carolina at Chapel Hill have created smarter immune cells that produce and deliver a healing protein to the brain while also teaching neurons to begin making the protein for themselves.

The researchers, led by Elena Batrakova, an associate professor at the UNC Eshelman School of Pharmacy’s Center for Nanotechnology in Drug Delivery, genetically modified white blood cells called macrophages to produce glial cell-derived neurotrophic factor, or GDNF, and deliver it to the brain. Glial cells provide support and protection for nerve cells throughout the brain and body, and GDNF can heal and stimulate the growth of damaged neurons.

“Currently, there are no treatments that can halt or reverse the course of Parkinson’s disease. There are only therapies to address quality of life, such as dopamine replacement,” Batrakova said.

“However, studies have shown that delivering neurotrophic factor to the brain not only promotes the survival of neurons but also reverses the progression of Parkinson’s disease.”

In addition to delivering GDNF, the engineered macrophages can “teach” neurons to make the protein for themselves by delivering both the tools and the instructions needed: DNA, messenger RNA and transcription factor.

Successfully delivering the treatment to the brain is the key to the success of GDNF therapy, said Batrakova. Using immune cells avoids the body’s natural defenses. The repurposed macrophages are also able to penetrate the blood-brain barrier, something most medicines cannot do. The reprogrammed cells travel to the brain and produce tiny bubbles called exosomes that contain GDNF. The cells release the exosomes, which then are able to deliver the proteins to neurons in the brain.

“By teaching immune system cells to make this protective protein, we harness the natural systems of the body to combat degenerative conditions like Parkinson’s disease,” Batrakova said.

The North Carolina Biotechnology Center awarded a $50,000 Technology Enhancement Grant to the School to help develop the technology into a viable treatment that can be licensed and commercialized.

“This award is an enormously important step towards further successful commercialization of our very exciting cell technologies,” said Alexander Kabanov, director of the nanotechnology center.

“We will continue our translational efforts at CNDD, and very soon I believe we will see these discoveries on the frontiers of scientific moving into clinical practice.”

This entry was posted on September 11, 2015 by The Lunatic. It was filed under Biology, Health and Medicine, Neuroscience Research and was tagged with cell biology, DNA, Genetics, health, medicine, neurobiology, neurology, parkinson's disease, peer reviewed, science.