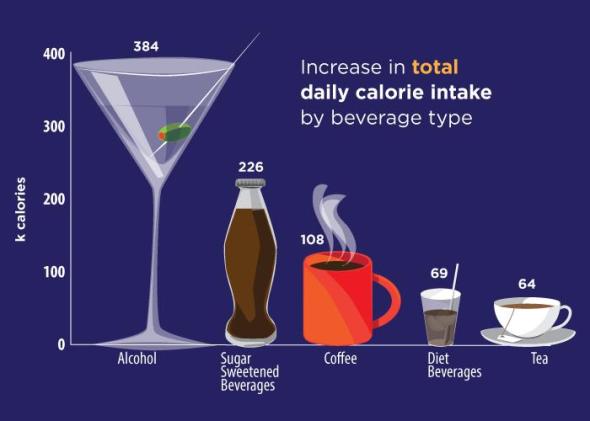 Want fries with that diet soda? You aren’t alone, and you may not be “saving” as many calories as you think by consuming diet drinks. A new study that examined the dietary habits of more than 22,000 U.S. adults found that diet-beverage consumers may compensate for the absence of calories in their drinks by noshing on extra food that is loaded with sugar, sodium, fat and cholesterol.

University of Illinois kinesiology and community health professor Ruopeng An examined 10 years of data from the National Health and Nutrition Examination Survey, conducted by the National Center for Health Statistics, which asked participants to recall everything they ate or drank over the course of two non-consecutive days.

An compared participants’ daily calorie intakes, including their consumption of discretionary foods and five types of beverages – diet or sugar-free drinks; sugar-sweetened beverages, such as sodas and fruit drinks; coffee; tea; and alcohol.

Using a U.S. Dept. of Agriculture food database, An compiled a 661-item list of discretionary foods, which includes foods that do not belong to the major food groups and are not required by the human body but may add variety to a person’s diet. These energy-dense, nutrient-poor foods include products such as cookies, ice cream, chocolate, fries and pastries.

More than 90 percent of the people in the study consumed discretionary foods daily, averaging about 482 calories from these products each day, An found.

Although previous research on beverage preferences and consumption of discretionary foods focused on between-meal snacking, An chose to look at the nutritional quality of the food participants consumed rather than when it was eaten. About 97 percent of the study population consumed at least one of the five types of beverages daily, with about 41 percent of respondents drinking beverages from at least two of the categories. More than 25 percent of the participants consumed three or more types of beverages daily.

Coffee was participants’ beverage of choice, consumed by more than half – 53 percent – of the population, followed by sugar-sweetened beverages (43 percent), tea (26 percent), alcohol (22 percent) and diet beverages (21 percent).

While coffee and diet-beverage drinkers consumed fewer total calories each day than people who preferred alcohol or sugary drinks, they obtained a greater percentage of their daily calorie intake from discretionary foods – a finding that suggests a possible compensation effect, An said.

“It may be that people who consume diet beverages feel justified in eating more, so they reach for a muffin or a bag of chips,” An said.

“Or perhaps, in order to feel satisfied, they feel compelled to eat more of these high-calorie foods.”

A third possible explanation might be that people opt to drink diet beverages because they feel guilty about indulging in unhealthy food, An said.

“We don’t know which way the compensation effect goes.”

Associations between beverage consumption and daily calorie intake differed substantially across population subgroups, An found. African-Americans who consumed diet beverages, sugary drinks and coffee, as well as Hispanics who drank alcohol, had the highest daily calorie intakes across all of the racial and ethnic groups.

In exploring associations between beverage type and dietary quality, An found that people who consumed sugar-sweetened beverages or coffee had the worst nutrition profiles.

Switching to diet drinks may not help people control their weight if they don’t pay attention to the quantity and quality of the foods they consume, An said.

“If people simply substitute diet beverages for sugar-sweetened beverages, it may not have the intended effect because they may just eat those calories rather than drink them,” An said.

“We’d recommend that people carefully document their caloric intake from both beverages and discretionary foods because both of these add calories – and possibly weight – to the body.”

An also recommended that public health interventions take a holistic approach, encouraging people to assess their beverage consumption in the context of their overall dietary behavior.

This entry was posted on September 13, 2015 by The Lunatic. It was filed under Health and Medicine, Psychology, Weight Loss Science and was tagged with diet, fat loss, health, lifestyle, peer reviewed, psychology, public health, science, weight loss.